Be Annoying For Jesus 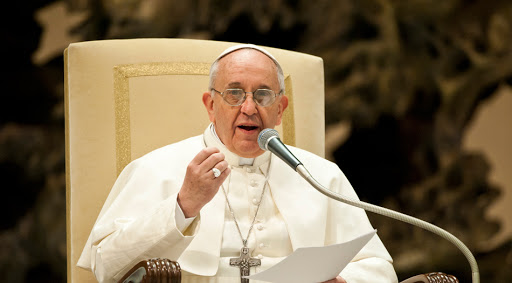 Man, I love this Pope.  I mean, I love him.  I see picture after picture of him with this amazing, joyous smile on his face, and it reminds me how badly I want to cultivate that sort of joy in my heart.

I love him so much that when he drops truth bombs, like the one about how a Christian “who constantly complains fails to be a good Christian: they become Mr. or Mrs. Whiner, no?”, instead of getting defensive and angry, I find myself remembering that joyous smile of his, and sheepishly hanging my head, saying, “Yup.  That’s me.  Thanks for the reminder, Pope Francis.  I’ll take it to heart and try better.” Pope Teddy Bear, spreading truth and love one goofy smile and agonizingly accurate observation at a time.

So when he recently gave a homily encouraging the faithful to not become “backseat Christians … who are well mannered, who do everything well, but are unable to bring people to the Church through proclamation and apostolic zeal,” I felt another head-hanging moment coming on.

When he urged us to say, “Blessed be the Lord!” when we annoy people because of our evangelization, and to “move forward, forward, forward, not to take refuge in a quiet life or in cozy structures,” I felt myself moving from sheepish head-hanging to a full-fledged panic attack.

Become annoying for the Lord?  Hold up – I know some annoying Christians.  They’re the ones who combine poor social skills with a desire to share Jesus so forcefully that it feels like it’s being shoved down your throat.  They’re the ones who are unable or unwilling to find any non-religious common ground with people, and seem to reduce everyone to little more than a “Christian” or “non-Christian” label.  I know those Christians.  They’re so… annoying.  And repelling.  Clearly, this is not the kind of “annoying” that our Pope is encouraging – not Pope Teddy Bear, who radiates love of God and neighbor so clearly that people are drawn to him.

No, the kind of “annoying” that Pope Francis wants us to cultivate is tied up with his other exhortation, to “not take refuge in a quiet life or cozy structures.”  He calls us to do the sort of evangelizing that is annoying to people – including ourselves – because it forces us to move outside of our comfortable little worlds.

So, instead of panicking that I was falling into the backseat Christian trap, I thought I’d take stock of all the ways that I annoy others – including myself – for the Lord:

1. The large, shiny white statue of Our Lady that perches over the cul-de-sac. I live in a stolid little New England town.  Outward displays of anything other than wealth are studiously avoided.  So to have an unapologetically religious artifact – in the front yard, no less – is probably pretty annoying to my neighbors.  Garden statuary of any sort is notably absent from the front yards around here.  Religious garden statuary positioned so that it’s the first thing you see when you pull up the street is a shocking deviance from the norm.  I want to install another pole on my house, so we can fly the Vatican flag under our American flag, but so far, my husband’s refused.  Clearly, I need to remind him about “breaking out of his cozy structure”.

2. We’ve never engaged in a prayer vigil outside an abortion clinic.  We haven’t yet hauled the eight of us in the van and participated in the March for Life.  Our care of the poor has been lately reduced to sporadic donations to our local crisis pregnancy center and participation in our parish’s food drives.  None of this is particularly zealous.

But you know what is?  Going out in public as a family.  Spending time together, obviously enjoying one another, in public settings.  The city soccer field may be closer than D.C., but hauling all eight of us there to support the ten-year-old during her games is a form of evangelization.  Just look at how annoyed our fellow spectators are when they see us taking up all the good spots.  Sometimes, for the extra annoying factor, the boys wear superhero costumes.

Getting carry-out may be quicker than a public meal shared as a family, but anyone who’s ever said grace before meals at a restaurant can attest – public, communal prayer can be a radical witness to Christ – and there are free tortilla chips after! Oh, and don’t forget the opportunities you have to annoy people for the Lord by bringing your small children to church, as any parent who has endured glares and unsolicited post-Mass parenting advice knows.

3. I know it’s so very tempting to air complaints about spouse and child on social media.  Trust me – I have erased more than my share of snarky, bitter status updates.  But have you ever seen people’s reactions to a post publically thanking your spouse for some mundane act of service he provided?  It’s amazing how small acts of vulnerability on your part result in a domino effect of gratitude.  Sure, you may feel like a doof for posting, “Thanks to my husband for taking time out of his day to get the oil changed on my car,” but people start coming out of the woodwork talking about the small, but meaningful domestic tasks their husbands and wives have done, and suddenly, you’ve helped cultivate a culture of cheerful service.  Thanks, Facebook!

Sure, my beloved Pope Teddy Bear may have bigger things in mind when he urges us to be filled with an evangelistic zeal so strong that it’s annoying to our neighbors.  But, as someone who is fully aware how annoying her life already is to the casual observer, I imagine the joy-filled smile on the Pope’s face, and know that the witness I’m giving is anything but that of a quiet life, clinging to cozy structures.

Now if you’ll excuse me, I have to go rescue my statue of Our Lady, as some of my boys are trying to organize an impromptu procession with her around our cul-de-sac.