Knights of Columbus: Fraternity and Service Rooted in Faith 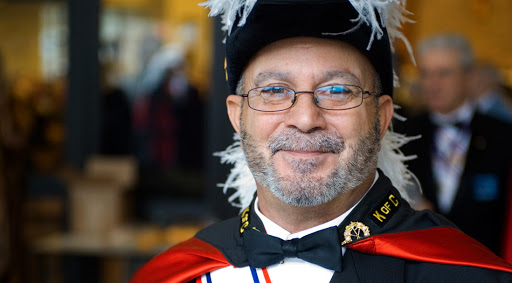 Knights encourage men to be loyal to God, country and neighbor

Flowers given to mothers each Mother’s Day upon exiting Church. Men offering lollipops as a thank you for donations to benefit the disabled. Ushers facilitating the ebb and flow of the crowds attending ordinations. An honor guard of men with swords brandished at my grandfather’s wake. The Knights of Columbus seem to be constantly hard at work, serving people and parishes throughout the United States as well as Canada, the Philippines, Mexico, Poland, the Dominican Republic, Puerto Rico, Panama, the Bahamas, the Virgin Islands, Cuba, Guatemala, Guam and Saipan. In cultures where religiosity is either disregarded or not always considered masculine, the Knights of Columbus demonstrate that the Catholic faith instructs men in becoming better, stronger men, who demonstrate their love of others through constant acts of service.

To an outside observer, the Knights might most closely resemble one’s understanding of a fraternity. No, not the college fraternities with t-shirts, beer-pong at the frat houses, and a considerable amount of debauchery – though the Knights definitely do enjoy beers together on occasion – but closer to the idea of what fraternities aim to be. Their stated four principles of purpose are charity, unity, fraternity, and patriotism. What distinguishes the Knights, of course, is that these core principles are informed by their faith and their common pursuit of virtue.

While the Knights certainly serve the Church through their charitable works, they don’t stop there. Yes, they have done everything from establishing Catholic youth centers to attending to the religious needs of troops in battle to providing funds for Catholic college education. But ultimately, they seek to bring the love of God through service to their entire community. Currently, the Knights are undertaking a national campaign to provide ultrasound machines to pregnancy centers. These machines allow women who are making decisions about their pregnancies to encounter their unborn children, to hear their heartbeats, to see them move in their wombs. The Knights also have a particular love for those with disabilities, whether those challenges be physical or mental. Regardless of creed, the Knights provide wheelchairs for those who cannot walk and funding for those who need assistance because of mental disabilities.

Unity is the core principle that explains the community aspect of the Knights. Individuals can, of course, live virtuously and seek to serve others around them. However, reality has taught us that people can accomplish more together, and that unity of purpose helps support individuals in their good works. Knights can be relied upon as a group to facilitate a diocesan pilgrimage with 6,000 people as well as partner with organizations such as Habitat for Humanity and the Special Olympics.

Fraternity takes the principle of unity and makes it that much more personal. Take my grandfather, for instance; you knew that he valued his fellowship with the Knights when one day he approached my aunt’s boyfriend (now my uncle) and told him – not asked him – that it was time to sign up for the Knights of Columbus. He recognized not only the positive acts of service the Knights performed, but also the solid companionship it offers men as they get married, become fathers, and progress in their careers. Out of this sense of fraternity, the Knights look out for their own. They run their own insurance program, they help to assist the widows and children of their deceased members and they provide a consistent base of friendship and support for all who join.

Lastly, the Knights' emphasis on patriotism is a quality that distinguishes them from a number of other lay groups. They seek to serve their country – after all, they are named after the discoverer of the New World – and through their work they seek to be among their nation’s most exemplary citizens.


Catholicism and Patriotism in the United States

The Knights of Columbus was founded during a time of anti-Catholic sentiment, particularly among some of the so-called secret societies of the time. In 1881, Fr. Michael McGivney in Connecticut decided that there needed to be a Catholic alternative to these societies: a fraternity that would provide men with fellowship while at the same time remain faithful to Catholic teaching. After gathering men in his parish, in 1882 the organization chose the name “Knights of Columbus” in honor of Christopher Columbus, a Catholic who discovered the land that would become America. From the start, then, the Knights of Columbus sought to show that being a good citizen and being Catholic were not mutually exclusive – in fact, quite the opposite.

Over 400,000 men joined the Knights of Columbus during the First and Second World Wars, drawn to the selfless service that the Knights provided to their country. Still a predominant characteristic trait of the Knights today, the organization provided hospitality to servicemen and women. Considered progressive for their time, they provided rest and recreation to everyone, regardless of people’s race or background. Of course, they were simply carrying out Christ’s teaching to love their neighbor as themselves.

One little known fact is that it was the Knights of Columbus who sought to have the phrase “under God” included in the Pledge of Allegiance. They lobbied for the phrase’s inclusion and used it in their own assembly meetings as well as encouraged congressional representatives to do the same. In 1953, President Eisenhower officially added the words to the pledge.

Today, the Knights of Columbus work to defend religious liberty in the United States as the country becomes increasingly relativistic and secular. Throughout the organization’s history, the Knights have emphasized our responsibility to be faithful Catholics as well as active citizens. They have demonstrated repeatedly that living out the Catholic faith only supports men and women in becoming better citizens.

Whether the issue of the day is anti-Catholicism, war, or an increasing tendency towards hedonism in our culture, Catholic men find a unique brotherhood in the Knights of Columbus. Knights are lay men and bishops, rich and poor, Irish and African. But what they all possess is a love for their country, a love for their neighbors, and a love for God. They support one another in being the men they are called to be, acting always to serve in fraternity with one another.