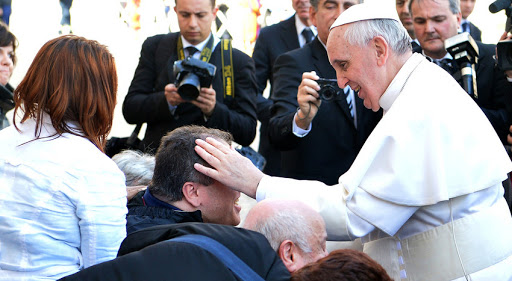 The Huffington Post has a screaming headline, Pope Francis says Atheists Who do Good are Redeemed, Not Just Catholics. Vatican Radio reports on the homily here.

In a homily at daily Mass in the chapel of the Saint Martha hostel, Pope Francis spoke on the principle that “doing good” is a principle that unites all of humanity. Commenting on the gospel where the disciples want to exclude a person who is doing good, but is not of their number, the Pope observes that Jesus says, “Let him be.”  The Holy Father then goes on to make his main point, that rabid intolerance and exclusion eventually leads to violence.

He explains that it does no good to exclude and scapegoat atheists or other non believers. Instead they too should be expected to do good and that is where we encounter them and the dialogue begins. This is too much for some, and the Pope is being accused of Pelagianism and Universalism. (Salvation by works and “Everyone will be saved.”)

“The Lord has redeemed all of us, all of us, with the Blood of Christ: all of us, not just Catholics. Everyone! ‘Father, the atheists?’ Even the atheists. Everyone! And this Blood makes us children of God of the first class! We are created children in the likeness of God and the Blood of Christ has redeemed us all! And we all have a duty to do good. And this commandment for everyone to do good, I think, is a beautiful path towards peace. If we, each doing our own part, if we do good to others, if we meet there, doing good, and we go slowly, gently, little by little, we will make that culture of encounter: we need that so much. We must meet one another doing good. ‘But I don’t believe, Father, I am an atheist!’ But do good: we will meet one another there."


This might seem on first reading to be teaching just what the Huffington Post proclaims: “Pope says Atheists are Saved by Doing Good Works.” One can’t blame a HuffPo journalist for getting the wrong end of the stick, and I suspect Todd Unctuous will have a few words to say about this later. However, the Huffington Post writer doesn’t understand the underlying theology.

Unfortunately for those who wish to paint Pope Francis as a lovable liberal, in fact, the Pope is simply affirming certain truths that any somewhat knowledgable Catholic will uphold. First, that Christ died to redeem the whole world. We can distinguish his redemptive work from the acceptance of salvation. He redeemed the whole world. However, many will reject that saving work. In affirming the universality of Christ’s redemptive work we are not universalists. To say that he redeemed the whole world is not to conclude that all will be saved.

Secondly, the Pope is also affirming that all humans are created in God’s image and are therefore created good. Yes, created good, but that goodness is wounded by original sin. Thirdly, he is affirming that all men and women are obliged to pursue what is beautiful, good and true. Natural virtue is possible–even obligatory, but natural virtue on its own is not sufficient for salvation. Grace is necessary to advance beyond natural virtue to bring the soul to salvation. The Pope does not say atheists being good on their own will be saved. He says they, like all men, are redeemed by Christ’s death and their good works are the starting place where we can meet with them–the implication being “meet with them in an encounter that leads eventually to faith in Christ.”

This method of evangelization is no different from the classic method of missionaries from St Paul onward. We meet the non believer on his territory, affirm what is good and beautiful and true about his belief and behavior, and move from there to introduce them to Christ.

Originally published by Patheos on May 23rd, 2013. Used with permission.