How You Can Pray With Pope Francis This Sunday 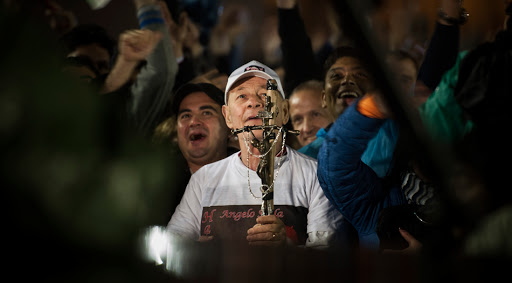 The Catholic world will be united with Pope Francis on the Feast of Corpus Christi as he leads a “historic” hour of simultaneous Eucharistic Adoration.
“Even some islands in the middle of the ocean … at two in the morning – they don’t have electricity – but even with that they will be in communion with us and Pope Francis for one hour,” Archbishop Rino Fisichella said as he explained the intense reaction he is seeing to the June 2 event.
“I am proud to say that this is a historical moment for the history of the Church because for one hour all the churches in the world will be united. … We are united because the Eucharist makes us all one body and one spirit, so we enter into the deepest meaning of the Eucharist,” the archbishop told CNA in a May 28 interview.
Archbishop Fisichella, who leads the Pontifical Council for Promoting New Evangelization, said that the strong response to the event did not surprise him because he has seen “an increasing number of people engaged in adoration” in recent years.
The gathering will be an hour of simultaneous adoration for the Feast of Corpus Christi, which Pope Francis will begin in St. Peter’s Basilica at 5:00 p.m. Rome time.
Archbishop Fisichella announced May 28 that there are two intentions for the Holy Hour.
The first is for the “Church throughout the world united today in Adoration of the Most Holy Eucharist,” that the Lord makes her ever obedient to his word so that she appears before the world as “beautiful, without spot or wrinkle, holy and without blemish.”
The second intention is dedicated to people around the world who are suffering from violence, drug or human trafficking, economic insecurity, and those who have been pushed to the margins of society.
As of May 28, the New Evangelization council had received responses from hundreds of dioceses worldwide, including all of those in Vietnam and South Korea.
The list is a virtual tour of the globe, stretching from Reykjavik, Iceland in the north, to dioceses in South Africa, Chile and New Zealand in the south.
Christ will also be adored in the Eucharist in the Cook Islands, Samoa, Honolulu, Papua New Guinea, the Solomon Islands and Guam.
Other countries with a large number of parishes or dioceses participating are: the United States with 243, India with 163, Brazil with 56, and Italy with 50.
While Pope Francis will pray in Italian and Latin, the local Holy Hours will be conducted in the local language.
The New Evangelization council has posted the program that will be used in Rome on its website and will soon make it available there in six languages.
The Year of Faith will be celebrated with another weekend event on dedicated to Pope John Paul II’s encyclical “Evangelium Vitae” (The Gospel of Life), which take place in Rome June 15-16.
Pilgrims will be coming from all over the world and will be able to make a pilgrimage to St. Peter’s tomb, take part in a teaching session with different cardinals or archbishops depending on their language, hold a silent candlelight march to St. Peter’s Square and attend Mass with Pope Francis.
English-speaking participants will receive catechesis from Cardinal Raymond Burke at the Pontifical Urban College, and attend a panel discussion with Professor Francis Beckwith from Baylor University and Robert Royal of the Faith and Reason Institute.
For further information on the Year of Faith events and to register for them, visit: www.annusfidei.va.

Originally published by Catholic News Agency on May 28th, 2013.