The Daily Caller just released the results of an inquiry of public records which shows the IRS Commissioner Douglas Shulman visited the White House at least 157 times during President Obama's first term, making him the government official with by far the most publicly recorded visits to the White House during that period.

Of Shulman's 157 publicly recorded visits, 118 of them took place during the time period leading up to the 2012 election that the IRS has admitted to intentionally targeting and intimidating conservative groups.

In comparison, the IRS commissioner during George W. Bush's second term had only one publicly recorded visit to the White House.

During the same time-frame as Shulman's 157 White House meetings, all other government officials had almost half as many publicly recorded visits. Attorney General Eric Holder had 62 visits. Then-Secretary of State Hillary Clinton had just 43.

Only publicly recorded visits are counted in the statistics and not all White House visits are recorded. The Daily Caller does qualify its study saying, "it is probable that the vast majority of visits by major Cabinet members do not end up in the public record. Nevertheless, many visits by current and former Cabinet members are in the logs, and the record depicts an IRS chief uniquely at home in the White House."

The IRS admits it singled out groups with phrases like "tea party" or "patriots" in their applications as a time-saving measure, but there is evidence they also targeted and intimidated prolife groups, Catholic groups, evangelical groups, and even a Catholic professor who had written critically of Obama.

Obama says he first heard about the IRS targeting through private media outlets when the news was intentionally leaked to the press by IRS official Lois Lerne on May 10th, despite the fact that he had met so frequently with the IRS commissioner and the White House had been given a preliminary report on the IRS investigation in April.

A graphic produced by The Daily Caller showing how often various government officials had publicly recorded visits to the White House: 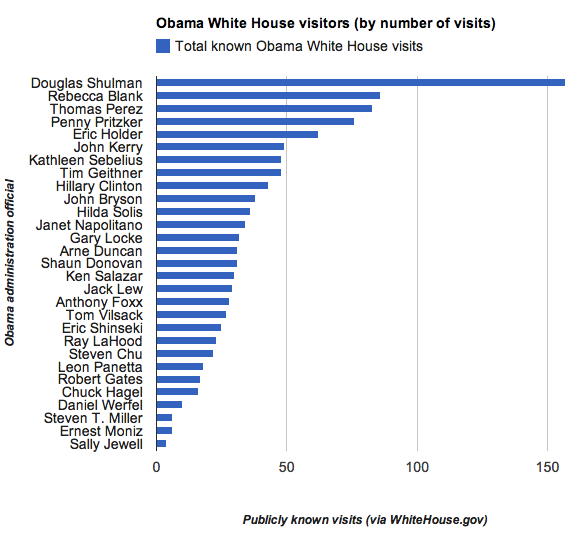