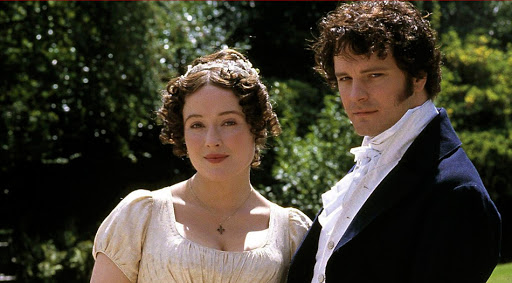 I bow to no one when it comes to appreciation of the 1995 BBC television adaptation of Jane Austen’s Pride and Prejudice. In terms both of faithfulness to Austen’s text and winsomeness of the acting and the production, it is unmatched. While I enjoy the nostril-flaring impishness of Greer Garson in the 1940 film adaptation with Laurence Olivier and the picturesque rusticity of the Bennet household in director Joe Wright’s 2005 film adaptation, I still much prefer the 1995 adaptation starring Jennifer Ehle as Elizabeth Bennet and Colin Firth as Mr. Darcy. If you haven’t seen it yet, then treat yourself immediately. Just don’t invite me to join you; I’ll ruin the whole evening by speaking the best lines a moment before the characters do.

But having just praised the 1995 adaptation, I must now concede that my appreciation has it limits. There is one scene – rather, part of a scene – that this adaptation gets wrong.

Unfortunately, the film’s mistake has to do with a line of dialogue spoken by Elizabeth Bennet to her sister Jane that is arguably the most important line in the novel. It’s not that the adaptation leaves the line out; the error is not that egregious. It’s rather that, just as Jennifer Ehle speaks the line in character as Elizabeth Bennet, the director chooses to cut away to Jane, thus diminishing the power of what Elizabeth says.

Hardly a monumental error, you may be thinking. And perhaps you may be right. But I’ve never been able to help wondering how much more powerful the scene and the adaptation would be if the camera had stayed on Elizabeth and we were able to register her expression as she spoke the line.

What is the line?

Allow me first to set the scene. We are in the second half of the story, and Elizabeth is reporting to Jane the contents of a letter she received from Mr. Darcy in which he explains, among other things, his reasons for not being on friendly terms with Mr. Wickham, the military officer for whom Elizabeth has developed a certain fondness. Wickham, it turns out, is a cad of the first water, and Darcy has the goods on him. Elizabeth is ashamed not only for having been taken in by Wickham’s lies, but also for having misjudged Darcy’s own good character. Austen continues with Elizabeth’s reaction, in lines that are mostly excluded in the 1995 adaptation:

“How despicably have I acted!” she cried. “I, who have prided myself on my discernment! I, who have valued myself on my abilities! … Had I been in love, I could not have been more wretchedly blind. But vanity, not love, has been my folly. Pleased with the preference of one, and offended by the neglect of the other … I have courted prepossession and ignorance, and driven reason away. … Till this moment, I never knew myself.”

That last line is the one we don’t see Elizabeth deliver in the 1995 adaptation: her admission that, until she read Darcy’s letter, she had lacked self-knowledge. Moral philosopher Alasdair MacIntyre has observed that self-knowledge is one of the key themes of Austen’s work; in four of her six novels, “there is a recognition scene in which the person whom the hero or heroine recognizes is him or herself.”

In the passage we have been considering, Elizabeth chastises herself for a want of discernment (lack of prudence), an overestimation of her abilities (improper pride), and a blindness to her defects (lack of humility). A similar moral accounting is made later in the novel by Darcy. The central narrative arc of the novel is thus a movement on the part of each of these characters from appearance to reality, from “first impressions” (Austen’s original title for the novel) to “full-fledged knowledge of who they really are.” And in coming to a clearer self-recognition, both Elizabeth and Darcy take the first step toward that friendship based on virtue that is the life’s blood of their romance.

In this year 2013, we celebrate the 200th anniversary of the publication of Pride and Prejudice. There are many qualities that make the novel great and its television and film adaptations so enjoyable. Audiences for 200 years have been captivated perhaps above all by Elizabeth and Darcy’s romance. But while their romance is indeed overwhelmingly charming, we miss the entire point of Austen’s novel if we fail to see that it is first and foremost a story of moral transformation that begins with self-knowledge.

I don’t know about you, but I’m going to celebrate this birthday by watching the 1995 adaptation again, for no doubt the zillionth time. Even better, I’m also going to re-read the novel.

Daniel McInerny is a novelist, journalist, and the CEO of The Comic Muse, a brand storytelling consultancy. You can contact him at daniel@thecomicmuse.com.