A Marian Pilgrimage Under the Aztec Sun 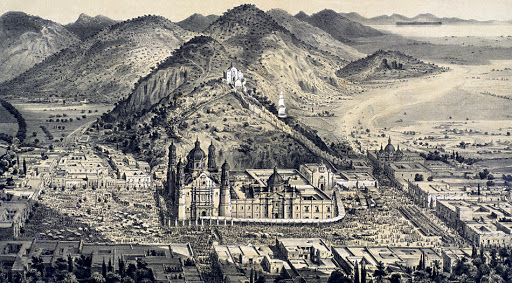 Nearly half a century after the miracle of Tepeyac, the Shrine of Our Lady of Guadalupe maintains a powerful allure.

Modern-day Mexico City is a bustling, cosmopolitan metropolis with a population of about 21 million. A place with a fascinating history, this Iberoamerican capital city –once the capital of the Aztec Empire under the name of Tenochtitlán – has long been the nucleus of Mesoamerica, even before the arrival of the Spanish conquistadores in 1519. It is not surprising, then, that the Spanish conquest of Mexico would be characterized not by the dominance of one culture over another (a reality seen in North American English colonies, for instance), but by a blend of the European and the native – a phenomenon so prominent, it would come to be known as mestizaje. And consequently, it would seem even less of a surprise that when the Mother of God appeared to a humble Indian convert by the name of Juan Diego in the year 1531, she herself would mirror the semblance of the mestizo peoples of this burgeoning society. (Learn more about the history of the apparitions of Our Lady of Guadalupe.)

Nestled within the hilly terrain of the northernmost reaches of the Mexican capital is a complex known to locals as “La Villa.” It is in this place – the hill of Tepeyac – where, nearly 500 years ago, the Virgin Mary appeared, forever consecrating an entire nation to her God. La Villa itself is a living time capsule – a fact made even more apparent by the presence of an imposing clock tower in the surrounding Plaza de las Américas, which makes use of various methods of timekeeping (indigenous calendars, sundials, bells, and analog clocks, to name a few) that would have been familiar to both natives and Europeans alike.

But moreover, the buildings populating La Villa are chronological markers that show the evolution of this sacred place over the course of half a century. Upon entering the complex, make your way past the modern basilica, where St. Juan Diego’s tilma – which bears the miraculous image of the Virgin of Guadalupe – is kept, and make your way toward the “Indians’ Chapel,” under the patronage of St. Joseph. Although it has undergone multiple changes and renovations over the centuries, this chapel is the earliest structure in la Villa, dating back to 1531-32. This humble chapel constitutes what was the first shrine to Our Lady of Guadalupe. Walk toward the sanctuary, and turn right; there, you will see a cavernous space hewn directly into the rock. It is here where Juan Diego’s tilma was first kept for public veneration, and where the now-canonized saint made his dwelling following the apparitions.

Next, begin the climb to the summit of Tepeyac, passing by the modern, conch-shaped Baptistry. There, perched upon the hill and with sweeping views of the surrounding Valley of Anáhuac, stands the Chapel of St. Michael. While earlier, more rudimentary shrines had been built shortly after the apparitions, this baroque chapel crowning the hill on which la Morenita appeared bears a rich history in its own right, dating back to the 18th century. Murals depict the story of the miracle that occurred on that very soil.

After taking in the blessed experience at the summit of Tepeyac, head down the other side of the hill. There, you will find a relatively recent (and beautifully done) monument to la Guadalupana and to the central figures of the apparition narrative: St. Juan Diego; the Spaniard, Juan Fray de Zumárraga – the first Bishop of Mexico; and various figures representing both natives and Europeans. These life-sized statues form a collective work of art called “La Ofrenda” (“The Offering”), which depicts the various figures paying homage to the Mother of God. The statues stand in a natural setting at the foot of Tepeyac. Two separate springs flow from this side of the hill, coming together at the feet of Mary, symbolizing the intermingling of two worlds into a single culture and religion – the mestizaje that is so prevalent throughout Mexico.

Just past the monument, heading back toward the main plaza, you will find the “Capilla del Pocito” (“Chapel of the Little Well”), another baroque edifice built around the waters flowing from Tepeyac. While Lourdes may lay claim to the world’s most renowned miraculous springs, the same can be found at la Villa (as well as at the nearby parish of Santa María Tulpetlac, where the Virgin appeared for the fifth and final time to St. Juan Diego’s ailing uncle, Juan Bernardino, and cured him of his illness).

As you walk back toward Plaza de las Américas, you will find the neoclassical convent of Capuchin nuns, followed by the old Basilica of Our Lady of Guadalupe. Officially known as the Expiatory Temple of Christ the King, this edifice was begun immediately following the apparitions in 1531, but was not completed until 1709. Once finished, it became the centerpiece of the entire Villa, and it is here where the sacred tilma was housed for over 250 years. In 1921, a member of Mexico’s anticlericalist movement placed a bomb in the sanctuary with the intent of destroying the tilma. While the bomb did manage to detonate, the tilma was unharmed. Instead, the crucifix that was on the altar took the lion’s share of the impact, leaving it permanently contorted. (That crucifix is now on display inside the modern Basilica.) Since its closing in 1974 due to sinking foundations (Mexico City has been built on top of a lake since ancient times), the old Basilica has undergone a great deal of restoration work. Today, this beautiful and historic testimony to la Guadalupana remains open for liturgies and perpetual adoration of the Blessed Sacrament.

In 1976, the imposing modern Basilica and Shrine of Our Lady of Guadalupe was consecrated. This new Basilica, which features a circular floor plan, was designed to allow unobstructed visibility of the tilma from any vantage point within the building. The tilma is now enshrined behind and above the sanctuary, on the rear wall of the Basilica, and pilgrims – the tens of thousands that come each day, making this the second most visited church in all the world (second only to St. Peter’s Basilica in Rome) – can get a close up view by stepping on a large conveyer belt (similar to those at airports) that transports you slowly across the length of the ample sanctuary, directly beneath the sacred image and out of view from worshippers.

Masses are celebrated around the clock inside the church, with confessions being offered continuously, as well. The principal Mass of the day will typically be celebrated by a visiting bishop. While the Feast of Our Lady of Guadalupe is observed on 12 December (recognized as a Solemnity and Holy Day of Obligation in Mexico), this is the typical scene at the Basilica every day of the year. Expect a massive swell of pilgrims around Christmas and Holy Week, but most of all, from 9 to 12 December, when the observances of St. Juan Diego and Our Lady of Guadalupe are celebrated. (A great jubilee is expected in 2031, which marks the 500th anniversary of the apparitions.)

Whether you are a believer, a curious tourist or anything in between, a visit to Mexico City compels a visit to La Villa – the very heart of Mexico’s spirituality (and indeed, a spirituality that is intricately intertwined with the nation’s culture). It is only by paying a visit to this shrine that you can come to understand why Bl. John Paul II once referred to Mexico as siempre fiel – “always faithful.” The soul of Mexico can be found throughout the metropolitan capital in its ruins, its monuments, its food, and its people. But the beating heart that gives a sense of enduring hope to a nation rich in heritage but suffering from poverty and severe violence is here in this northernmost enclave of the city.

Is it any wonder that pilgrims who have already come on foot from long distances, even over the course of several days, make their final approach to the sacred tilma on their knees? Or that they will remain under the gaze of their Mother for hours on end as they laugh, weep, sing, and otherwise bare themselves in her reassuring presence? Is it any wonder that the inscription above the main doors reads, “Am I not here, who am your Mother?” – words spoken to Juan Diego, “the littlest” of Mary’s sons?

Come and see, weary traveler. There is a seat open for you in Lupita’s house.