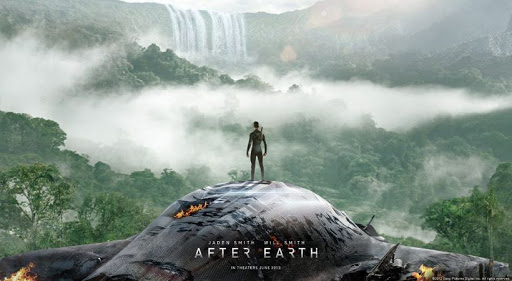 After Earth is not the big summer release the studios want you to think it is. To be sure, it’s got the pedigree for one. It stars Will Smith, one of the most popular (not to mention highest paid) actors in the world right now. It’s directed by M. Night Shyamalan, whose previous film, The Last Airbender, might not have done so well, but he is still one of the most high profile writer-directors of the past two decades. And it’s got a healthy $130 million budget, which may fall short of the $200+ million budgets of movies like Iron Man 3 or Man of Steel, but is still more than enough to produce a respectable effects-laden sci-fi picture (the recent Oblivion was made for $10 million less). Despite all of that, though, After Earth is no blockbuster. What it is, when all is said and done, is a potentially nice B-movie that got way out of control.

The blame for that probably lies squarely on Smith’s shoulders. He reportedly came up with the basic premise for After Earth (a man gets injured while on a camping trip with his son, and the boy has to make it back to civilization on his own in time to save his father) a few years back and took it to writer Gary Whitta (The Book of Eli), hoping to develop it into a project for his son Jaden. Once Smith got Shyamalan involved, however, the two apparently went a bit bonkers and decided to try and “flesh out the bare bones” concept into a multi-media science fiction franchise by moving the story into the far-flung future and bringing Smith on as the star rather than just as a producer.

And that's likely where things went wrong, because After Earth's story in no way can support a multi-media science fiction franchise. The movie begins with a monologue explaining how, after escaping a pollution-ravaged Earth, humankind is nearly decimated by creatures known as the Ursa – beasts who track their prey by sniffing out the pheromone produced from strong feelings of fear. Things begin to improve, however, after the fearless Cypher Raige (Will Smith) demonstrates that the Ursa are blind to those who keep their cool, thereby allowing soldiers to simply walk up and kill the things. Unfortunately, Cypher's young son, Kitai (Jaden Smith), has been unable to learn to master his emotions after witnessing an Ursa kill his sister, and as a result, his relationship with his father has become strained. Hoping to reestablish a connection with the boy, Cypher takes Kitai along on a routine mission so they can spend time together, but their ship becomes damaged while passing through an asteroid field, and the two find themselves crash landing on the long abandoned Earth. With his father critically injured and unable to walk, Kitai must journey alone across the hostile environment in order to find the emergency beacon lost during the fiery descent to the planet. And just to make matters worse, the captive Ursa, which was being transported aboard the ship for training exercises, has escaped and is looking for a meal.

And that's all there is to it. About two thirds of the movie involves Kitai trudging through the CGI jungles of Earth (the place seems to have thrived since all the people left) and running into various perils along the way – everything from angry CGI baboons to giant CGI birds to cold-looking CGI snow. And you can probably guess what CGI thing Kitai runs into last (yes, it’s that predictable, which is a really odd thing to say about an M. Night Shyamalan film when you stop to think about it, but it’s the truth). And once the formula has played out, there’s really no other place for the story to go. It’s possible they could concoct some elaborate backstory for the Ursa, but there’s nothing in the movie that hints of anything else there besides wild animals. As for what happens to Cypher and Katai after the credits roll… well, there's a problem with that also. You’re really just not going to care that much.

Now, I’m not disparaging the actors themselves – they're fine. Sure, there’s a little nepotism at play in the casting of Jaden Smith, but with a few movies and TV shows under his belt, he’s really not that bad of an actor. In fact, he might even be a little better than his dad this time around. Whether it’s because the screenwriter had a certain voice in his head while typing or because the project itself was originally developed with other actors in mind, for whatever reason, the elder Smith jettisons his usual charismatic persona and instead plays his part like he’s trying to channel Denzel Washington, albeit a version of Denzel Washington completely made of wood. And because the story calls for a son trying to emulate his father, Jaden plays his role stiff and emotionless most of the time as well. It might make sense plot-wise, and it’s tolerable enough for the relatively short running length of one movie, but it’s hard to imagine too many people lining up to watch a series of films featuring characters who act like stone trees pumped full of Valium.

Still, given some of the dialogue in the movie, maybe it’s not such a bad thing the characters don’t speak too often. As you may have heard from some of the film’s pre-release buzz, there are many who suspect After Earth to be some kind of ode to Scientology. Having now seen the film, I can say that much of what the characters say will do little to dissuade viewers that this is the truth. During most of Katai's journey through the jungle, he has a communicator on his wrist that allows his father to offer survival advice as circumstances call for it. The thing is, the advice Cypher gives sounds amazingly like phrases straight out of Dianetics, the philosophical system L. Ron Hubbard designed to teach his followers how to overcome the “reactive mind” and take control of their environment. So there is a lot of talk about fear being an illusionary product of thoughts, and how Katai needs to tune into his own senses in the present moment and begin creating his world rather than just responding to it. From a Christian standpoint, some of it makes sense and some of it doesn’t – but either way, it all sure sounds like Scientology.

Now, I’m not pointing this out to say that After Earth should be avoided simply because it advocates a non-Christian religion. As noted in the Vatican II document, Nostra Ætate, the “Church rejects nothing of what is true and holy in [other] religions. She has a high regard for the manner of life and conduct, the precepts and doctrines which, although differing in many ways from her own teaching, nevertheless often reflect a ray of that truth which enlightens all men.” So when the movie espouses the notion that one should overcome fear, that’s something Christians can agree with. Of course, we believe fear ultimately stems from a lack of trust in God’s love, while the Scientologists think it just a self-created illusion of the mind, but at least we share common ground that it's a spiritually unhealthy state of consciousness to remain in for too long.

So the problem isn't really that After Earth engages in a little proselytizing on behalf of Scientology; it's that when you combine it with the flat acting of the Smith men and the bloated pretensions of the filmmakers, it helps turn what should have been an enjoyably simple, low-budget time killer into Battlefield Earth. And nobody – I mean nobody – wants that.