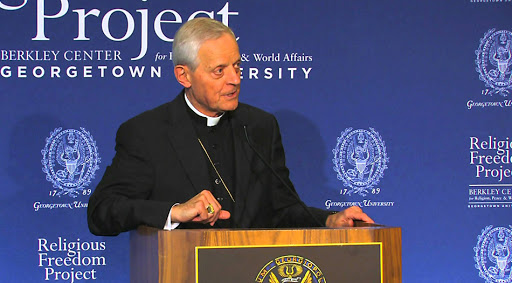 A canon law petition asking Cardinal Donald Wuerl to rescue Georgetown University's Catholic identity or declare that it can no longer refer to itself as Catholic was delivered to the Archdiocese of Washington today, a group of Georgetown alumni, students, parents, faculty and others has announced.

Distinguished Georgetown alumnus William Peter Blatty, an Academy Award winner and author of The Exorcist, announced in May 2012 the formation of the Father King Society and its plans to file a complaint under the Catholic Church's canon law.  The completed petition documents abuses of Catholic identity at Georgetown University and non-compliance with Church law for Catholic universities.  The group is seeking remedies "including, if made necessary, the removal or suspension of top-ranked Georgetown's right to call itself Catholic and Jesuit in its fundraising and representations to applicants," according to leaders.

The document is signed by more than 1200 individuals.  It includes 198 pages, 476 footnotes, 91 appendices and 124 witness statements documenting 23 years of "scandals and dissidence," the King Society reported.

Submitted with the petition is a 120-page dossier prepared by The Cardinal Newman Society at Blatty's request, summarizing Georgetown scandals documented by the Society over several years.  The Newman Society and canon law experts were consulted for advice by the King Society throughout the year-long process of preparing the brief.

Neither the canon law petition nor the Cardinal Newman Society dossier will be made public at this point in time.

"Ignoring the magnitude of what is at stake in losing a major university like Georgetown to the well-organized efforts that are fundamentally anti-Catholic, some well-meaning friends or earnest Jesuit might want to point to the liturgies, the chaplains, the Knights of Columbus chapter, and so on," Blatty told The Cardinal Newman Society.  "Georgetown administrators wish to assure us that they speak to the Archbishop and visit Rome regularly.  We know the litany all too well.  It describes a Potemkin village."

Over the past year, Blatty and his group rallied the support of the Georgetown community and others concerned for the University to join the canon law petition.  The King Society's website www.GUpetition.org includes a letter from Blatty and descriptions of Georgetown's historical ties to the Jesuits, the Washington Archdiocese and the Vatican.

Manuel A. Miranda, who serves as counsel to Blatty, said, "What is evident is that Georgetown University has been captured by the ideology of radical autonomy.  It pervades everything.  Academic freedom is now prisoner to intolerant new orthodoxies, and Catholic moral teaching has surrendered to the dictatorship of moral relativism."

After the King Society announced its intentions in 2012, The Cardinal Newman Society was granted an exclusive interview with Blatty about the petition, his motivations, and role as a Georgetown University alumnus.

The press release about today's delivery of the petition is available from the King Society here.

Originally published by The Cardinal Newman Society's Catholic Education Daily on May 31st, 2013.