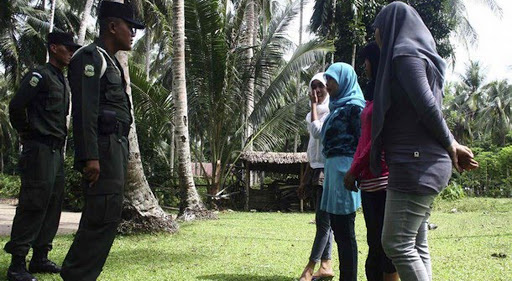 Norma Susanti Manalu once enjoyed a lot of freedom but now finds it very difficult to fully exercise what she says are her rights.

That’s because she and virtually every other woman in Aceh are living under sharia, or Islamic law, which was introduced in the province back in 2002.

Sharia was introduced in Aceh after the province was granted special autonomy status, as part of a government deal to end a decades-long guerilla war with the separatist Free Aceh Movement.

Aceh, where Muslims comprise 96 percent of the province’s 5 million population, is the only sharia province in Indonesia.

Sharia law is implemented under a set of bylaws known locally as qanun.

These bylaws dictate how women dress and how they conduct themselves in public, especially when it comes to contact with men who are not related to them. Inappropriate contact is known askhalwat.

“These bylaws shackle us. Still, many women choose to keep silent because they are afraid … because protesting against the bylaws means protesting against Islam,” says 37-year-old Manalu who works for Balai Syura Ureung Inong Aceh, an NGO promoting women’s rights.

Protests would lead to marginalization by society, or worse, she added.

“As women, our freedom including the way we dress and behave is ruled by the government,” she said.

For instance, one regulation stipulates that every Muslim is obliged to wear Islamic clothing.

Islamic clothing here is defined as covering the aurat (which for men is the knee to navel, and for women all parts of the body with the exception of the hands, feet and face).

If they fail to wear Islamic clothing, they are given a warning and “advice” by the Wilayatul Hisbah, or religious police. Repeat offenders will face ta’zir (punishment), which has not yet been specified.

But according to Azriana Rambe, an activist from the Women Volunteers for Humanity, the definition of Islamic clothing isn’t clear.

“It makes us, women, feel uneasy whenever we want to dress up. We always wonder whether our clothes are breaking the qanun or not,” she says.

If a Muslim – man or woman — commits khalwat, they will receive from three to nine lashes and/or a fine of up to 10 million rupiah (US$1,050).

“However, it is women who bear the psychological and social burdens from these cases. People see them as prostitutes and sinners,” Rambe says.

In September last year, a 16-year-old girl hanged herself three days after she was arrested by theWilayatul Hisbah and accused of being a prostitute.

The crime of her and a friend was to attend a concert in Langsa, in East Aceh district.

Her family later found a suicide note in her school bag, saying: “Father, forgive me, for I have brought shame on you and others, but I swear that I never sold myself to others. That night I was just watching a concert in Langsa, and I was sitting in a field with a friend.”

If introducing sharia aims to instill greater morality in the young then the policy has backfired, many activists say. Instead it has instilled resentment at the oppression and put women at greater risk from violence.

A report released last September by 16 NGOs dealing with women’s rights said there were 1,060 reported cases of violence against women in the province between 2011 and 2012. The NGO’s managed to verify 561.

Of this number, 413 cases, or 73.6 percent, were cases of domestic violence while 148 others or 27 percent were violence resulting from sharia-based bylaws.

“We find that sharia, which was imposed to improve morality among people in the province, has failed to bring about any significant result,” says Samsidar from the Women’s Association for Justice and Legal Aid Institute.

This strict moral code is not working, she said.

Originally published at UCAnews on 7 June 2013.  Used by permission, all other rights reserved.