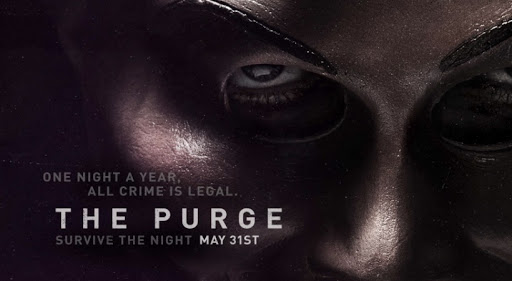 A horror movie with a social justice message

Who doesn't love a good party, right? That’s why it’s probably a safe bet that even most non-Christians are familiar with Fat Tuesday, the final day before Lent commences. For centuries, Fat Tuesday has been the day in which the faithful (and these days, the not-so-faithful) cut loose and feast on all those delicacies they’re about to give up during the 40 days of fasting and penance preceding Easter. Well, that's sort of the same basic idea behind The Purge, except instead of indulging in food and drink, everyone who participates in this particular purge goes out and murders someone.

What bunch of morons thought that would be a good idea for a holiday? Well, our government did actually – or at least, it will sometime in the near future if this new film is to be believed. It would seem that at some point during the next few years, crime is going to reach such astronomical rates that the citizenry will readily accede to a government-sanctioned national day of lawlessness known as “The Purge.” On that particular day each year, for twelve hours, all crimes of any kind are permissible with no threat of legal repercussions. That means any criminal is free to do as they see fit during that period, but also that any law abiding so inclined can simply go out into the streets and hunt them down for sport.

As a result, by the year 2022, The Purge has effectively reduced the crime rate to 1 percent, while improving the quality of life for an entire country. Reaping the benefits of all this is James Sandin (Ethan Hawke), a home security system salesman who does especially well in the months leading up to the annual night of carnage. On the evening of this particular Purge, however, James isn’t going to get to spend the evening barricaded safely inside his home with his family as he usually does. While surveying the streets outside their house via security cameras, James’ young son Charlie (Max Burkholder) notices an injured man calling out for help. Temporarily disabling the home’s defenses, Charlie beckons the man to come in to safety, much to the horror of his parents and sister who have no idea what kind of person they are now locked in with. But before the Sandins can deal with the situation inside, the horde of masked teenagers who have been hunting the stranger as part of The Purge arrive outside demanding that their prey be turned over to them. If the Sanders refuse to comply, they are informed, then the teens will lay siege to the home and kill everyone they find. Before the Sandins can make a decision, however, the stranger takes his fate into his own hands and hides himself away somewhere in the Sandins’ impressively large mansion. Things go horribly wrong from there (and when I say they go wrong, I’m not talking about just for the characters).

The Purge has everything it needs to be a tense little nail-biter: a cast of competent actors, a capable enough director, and a perfect setup for a gritty siege movie. Unfortunately, the film has a fatal personality flaw that keeps undercutting its potential: it takes itself way too seriously. You see, in the possible future posited by The Purge, it is the poor who suffer the most during the yearly wilding. The wealthy can afford to live within gated communities inside homes with elaborate fortifications, while the impoverished can only bolt their doors and hope for the best. Because of this, The Purge doesn't simply function as a means of thinning out the criminal population, it also acts as a culling out of all of society’s “undesirables.” And the movie desperately wants you to be aware of this, not only by peppering the film with talking heads on the Sandins’ television discussing the topic, but by having characters constantly refer to the social status of those most affected by The Purge. The thing is, by the umpteenth time someone refers to the man hiding in the Sandins’ home by some variation of "homeless swine who serves our needs", the movie begins to feel less like an edge-of-your-seat thriller and more like one of those old "soul winners" they used to show to evangelical congregations back in the day. To call the movie heavy handed with its message is being gentle.

Perhaps the proselytizing wouldn’t be so problematic if the premise of The Purge wasn’t on such shaky ground to begin with. You can’t afford to keep drawing your audience’s attention away from the action and towards your movie’s central conceit when said conceit raises too many unwanted questions. For instance, why does nobody commit any crimes for the 364 days and 12 hours that aren’t part of The Purge? And when they finally do take the opportunity to break the law, why is murder the only crime anyone seems interested in committing? Doesn’t anyone want to steal, rape, vandalize, embezzle, do some inside trading, or buy illicit drugs anymore? Heck, as far as I can tell, nobody even bothers to double park during The Purge; it’s all about the killing.

Speaking of which, why don’t the poor kill anybody? The movie presents The Purge as something of a turkey shoot, in which the affluent pick off the impoverished at will, while the lower class just huddles in fear and awaits its doom. And yet, current statistics would suggest that poor people are quite capable of committing their fair share of crimes, so why don’t hordes of have-nots simply descend on wealthy neighborhoods during The Purge and engage in some lethal redistribution of wealth? And honestly, why would the country go along with all this in the first place? The Purge posits that it will take less than ten years from now for a bunch of Tea Party-style legislators (yes, the movie goes there) to institute a pseudo-theocratic government (all of the participants in The Purge speak of it in terms of cleansing their souls) with the power to suspend all laws across the nation, and most people will approve and go along with it. That's a pretty big suspension of disbelief to ask of an audience.

I feel bad for The Purge – I really do. Thanks to its shoddy world-building, most people will likely spend their post-movie time laughing over the film’s lapses in logic rather than discussing the questions the movie would rather they be asking (and these are not bad questions). Not only is there the personal dilemma faced by the Sandins (is it okay to turn over an innocent man to die at the hands of a bloodthirsty mob in order to save your own family?), but there are the greater societal questions as well. Could a person support legislation like The Purge because it affects them and their peers positively, even if they knew it would have an adverse affect on an entire class of people? In the case of something as extreme as The Purge, most people would probably answer no. But extrapolating the question from its fictional setting and bringing it into the real world, the question has a bit more bite to it, especially for Christians. Do we currently have systems in place – governmental, economic, or otherwise – which unfairly benefit the wealthy at the expense of the poor? Maybe, maybe not. Either way, it doesn’t take much Bible reading to figure out that the Church is commanded by God to be on the watch for such instances of social or corporate sin and to do what it can to combat it.

So it’s not the questions The Purge wants us to ask that are the problem; it’s the questions we actually end up asking which bring the movie down a few notches. Even so, the “what if” scenario is still interesting enough that if you’re willing to roll with the gaps in logic, The Purge isn’t a complete waste of time. And who knows – if they were to address some of the bigger plot holes in the premise, audiences might not be adverse to seeing a “Purge 2” somewhere down the line. After all, we might as well get used to the idea since, if the movie is correct, we’ve only got a few years left before the real thing is upon us.