“I Didn’t Want to Be Pope,” Francis Tells Children 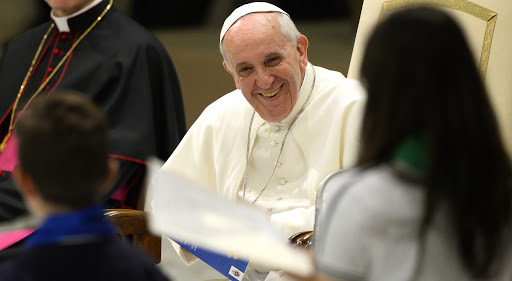 Pope throws away the script in laughter filled Q&A session

“God does not bless a person who wants to be Pope. I didn’t want to be Pope.” “I live at St. Martha’s because I like being around people…” Francis’s audience with young Italian and Albanian students in the Vatican this morning turned into an impromptu dialogue as the Pope decided to scrap the five page speech he was going to make to prevent boring them and their teachers and families, opting to give them an improvised summary instead: “I have prepared a speech, but it’s five pages long! A bit boring… Let’s do this: I’ll quickly sum up what I’ve written here and I’ll send the text to the provincial father. I’ll also give it to Fr. Lombardi so you all have a copy.”

The Pope started off by stressing that the core element of the education Jesuits receive is how to be magnanimous. This is for the benefit of our personal human development. “What does it mean to be magnanimous? It means to have a big heart, to have a great spirit; it means to have great ideals, the desire to do great things to respond to that which God asks of us, and exactly this doing of daily things well, all of the daily acts, obligations, encounters with people; doing everyday small things with a big heart open to God and to others.” The Pope stressed the importance of achieving magnanimity with Jesus and in contemplation of Jesus. Jesus makes us always look to the horizon.”

Francis went on to give a piece of advice to parents and teachers. He said education was about “a balance between giving young people security and letting them enter the risk zone…children need to be brought out of their safety zone now and again. If they are not, they do not develop a personality. But they also mustn’t just be brought up in the risk zone: this is too dangerous.” Francis encouraged educators “to look for new and unconventional forms of education, according to “the need of the places, times and people. To Jesuits, then, I would like to say that it is important to nourish their commitment in the field of education, ” in the spirit of St. Ignatius.

Then the Pope’s question-and-answer session with the young Jesuits kicked off. Addressing him informally, the students’ first question was about why he has chosen not to live in the apostolic palace and doesn’t have a big car or wear lots of gold and precious stones. “It’s not just a question of wealth. It’s to do with who I am: I need to live among people. If I lived alone and perhaps isolated myself a bit, it wouldn’t be good for me. A professor asked me the same question: why don’t you go and live there? My reply to him was: for my own mental wellbeing. It’s just who I am. The apartment isn’t the height of luxury but I can’t live alone.”

Speaking of sobriety, he went on to say: “The fact there is so much talk of poverty in the world today is scandalous! How can there be so many children that are starving, that are not receiving an education and that are so poor when the world is so rich and has so many resources to feed everyone? Poverty today is a cry for help. We should all try to consider becoming a little bit poorer. How can I make myself a bit poorer so I can resemble Jesus, a poor teacher?”

The Pope also spoke about his friends in answer to one little girl’s question: “ I’ve been Pope for two and a half months now and my friends are fourteen hours away from here. They are far away. Three of them came to see me. I see them, I write to them… You can’t live your life without friends, they’re important!”

Another girl asked him why he became a Jesuit. He replied: “What I like most about the Society is its missionary spirit. I wanted to become a missionary. When I was studying philosophy I wrote to Fr. Arrupe (who was Superior General of the Society at the time, Ed.) to ask him to send me to Japan or somewhere else. But he thought about it carefully and was said to me so kindly: “But you had a lung condition and a tough job like this may not be the best thing for it.” So I stayed in Buenos Aires. But Fr. Arrupe was so good to me because he didn’t say: You aren’t holy enough to become a missionary”: he was good, he was kind eh! The prospect of missionary service gave me so much strength to become a Jesuit: going out to the missions to announce Jesus Christ. I think this is a core part of our spirituality, going out: going out to announce Jesus Christ and not becoming too closed within our worlds, which are often ephemeral, aren’t they? That’s what made me want to become a Jesuit.”

In answer to a little boy’s question about wavering faith, the Pope said: “Always remember this: you must not be afraid of failure or taking a tumble. The art of walking is not about not falling at all but learning to pick yourself up and carry on. If you fall down, get up quickly and carry on walking.”

Finally, in answer to another question, Francis spoke about the political efforts of faithful: “Getting involved in politics is a Christian duty. We Christians cannot be like Pilate and wash our hands clean of things. We need to get involved in politics because it’s one of the highest expressions of charity. It takes the common into consideration. Lay Christians must work in politics. That’s no easy task you might say. But it isn’t an easy task becoming a priest either! Politics is dirty but the reason it has become dirty is that Christians didn’t get deeply enough involved in the evangelical spirit. It’s easy to find excuses for this… but what do I do? Working for the common good is a Christian duty.”

"Originally published at UCAnews on 10 June.  Used by permission, all other rights reserved."