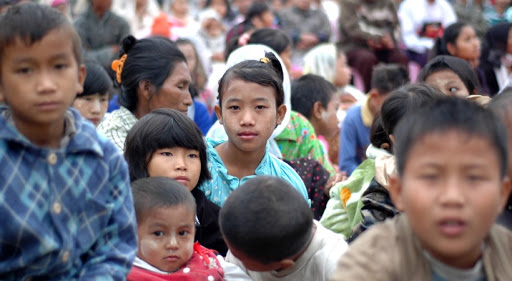 Two years since the beginning of the conflict, there’s still no firm timetable for the withdrawal of soldiers

Two years into the conflict in northern Myanmar’s Kachin state, tens of thousands of refugees remain in camps. Despite some recent success in peace talks between the government and the Kachin Independence Army (KIA), aid workers warn that the situation remains too risky for refugees to return to their homes.
Government minister Aung Min, who has spearheaded ceasefire negotiations with the Kachin, said a fortnight ago that the more than 85,000 displaced should leave camps by the end of the monsoon season. But with clashes still occurring two years after the conflict first erupted on June 9, his remark was not greeted positively.
“If we send the people back to their homes at the end of monsoon season, it’s like we’ll be letting them die in their villages,” said Khon Ja, coordinator of the Kachin Peace Network. One problem she cited was the lack of a timeframe for the withdrawal of troops from civilian areas.
“There is no guarantee for the people to go back to their homes safely. The government must act to address the issues,” she added.
The two sides last week signed a seven-point agreement that could see the fighting scaled back. The KIA however is demanding that a political dialogue take place over the status of the northern state, which still demands autonomy from Myanmar.
“We want to go back home but I presume that we can return home only when there is no more fighting and peace is brought to the region,” Mayang Roi, a 55-year-old woman from Mang Wing refugee camp in Kachin state, told ucanews.com.
The two years of fighting have had a major impact on the social fabric of the Kachin. Mary Tawn, co-founder of the Wunpawng Ninghtwe relief organization based in the Kachin state town of Mai Ja Yang, said that schools and houses would need to be rebuilt before refugees return to their villages.
Diminishing international aid reaching the refugees is compounding the concerns about their future. The main UN relief agency appealed for US$ 50.9 million to help the refugees between March and December this year, but has so far only received US$ 1.2 million.
The government has placed tight restrictions on aid reaching refugees in KIA-controlled territories, fearing it could bolster the opposition force. So far, only a handful of relief convoys have been allowed to enter territory that is not controlled by the government.