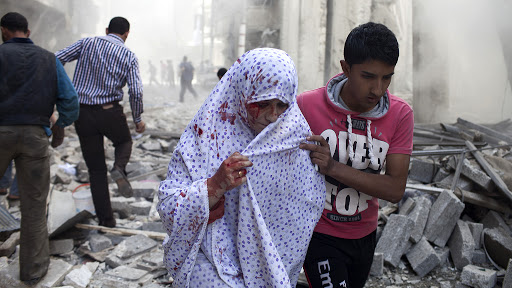 In April there were assessments made by the US government suggesting that Assad’s forces might have used chemical weapons on Syrian rebels. Since then the intelligence community has been gathering credible information in order to ascertain reliable facts about the situation.
Now reports are in from the White House confirming that they in fact did use chemical weapons on a small scale. This will be a turning point for US intervention. Back in April President Obama had stated that the use of chemical weapons was crossing a “red line”. Today it is clear that line has been crossed by Assad and his forces.
Ben Rhodes, the US deputy national security advisor for strategic communications has made a statement from the White House, disclosing to the public an update of intelligence findings.
“Following a deliberative review, our intelligence community assesses that the Assad regime has used chemical weapons, including the nerve agent Sarin, on a small scale against the opposition multiple times in the last year” he states.
“The use of chemical weapons violates international norms and crosses clear red lines that have existed within the international community for decades.”
Assad deliberately refused access to the United Nations so that they could make appropriate investigations into these allegations of chemical weapons use. The US and its partners have been working alongside allies and individuals inside Syria to procure and appraise reliable information.
“We believe that the Assad regime maintains control of these weapons. We have no reliable corroborated reporting to indicate that the opposition in Syria has acquired or used chemical weapons.”
The type of information they gathered to ascertain these facts included reports detailing Syrian officials’ plans and executions of chemical weapons attacks; reports that detailed the times, locations and means of such attacks; the physical symptoms they documented corresponded with those typical of exposure to sarin and other such agents. Information has also been obtained from various media outlets, as well as lab analysis of physiological samples.
Thanks to these various sources of information, the intelligence community, according to Rhodes, now has a “high confidence assessment” that Assad’s regime has been using chemical weapons against Syrians on a small scale.
“The President has been clear that the use of chemical weapons – or the transfer of chemical weapons to terrorist groups – is a red line for the United States “ he remarks, “as there has long been an established norm within the international community against the use of chemical weapons.,”
He adds “The President has said that the use of chemical weapons would change his calculus, and it has.”
Indeed Rhodes revealed that the President has ordered additional “non-lethal” assistance to Syria’s civilian opposition as well as to the Supreme Military Council (SMC). “The effort is aimed at strengthening the effectiveness if the SMC and helping to coordinate the provision of assistance by the United Sates and other partners and allies” says Rhodes.
He concludes “The Assad regime should know that its actions have led us to increase the scope and scale of assistance that we provide to the opposition, including direct support to the SMC. These efforts will increase going forward.”