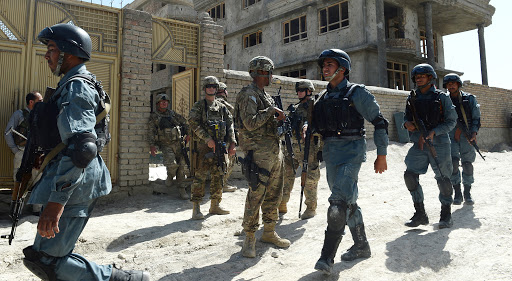 Afghanistan's troops have officially assumed full control of their country's security, as Nato forces begin to wrap up their handover assignment which began in 2011 with the province of Bamiyan.

Bayiman, as one of Afghanistan's most secure provinces, was the first area to be given to Afghan security forces for full control, back in July, 2011. This was the first vital step in Nato's plans for complete withdrawal from the country by 2014.

Today that plan is closer to fruition than ever before, as the International Security Assistance Force (ISAF), led by Nato, formally transferred full responsibility of the nation's security to Afghan forces, in handing over the control of its last 95 districts.

There are still, however, a few rogue districts which remain to be controlled by authorities. These include 13 areas in Kandahar (birthplace of the Taliban) as well as various zones on the border with Pakistan –  Nangarhar, Khost and Paktika – which are held under the bitter anarchy of Taliban millitants.

The completion of the handover was announced by President Hamid Karzai, at a ceremony marked as the beginning of ISAF's full departure from Afganhistan.

"Our security and defence forces will now be in the lead," the president proclaimed to an audience of 2000, comprised of Afghanistan's political and security leaders as well as foregin dignitries, including Nato Security General, Andres Fogh Rasmussen. "From here, all security responsibility and all security leadership will be taken by our brave forces" he continued.

The proud leader commended on the bravery of the Afghan soldiers, remembering particularly the men who had died in action, making "the ultimate sacrifice to defend their country and their people."  He remarked "this has been one of my greatest desires and pursuits…and I am glad that I, as an Afghan citizen and an Afghan president, have reached this objective today."

Janan Mosazai, Spokesman for Afghanistan's foreign affairs ministry, shared in the president's elation, “this is a great day for us, not only for the Afghan government but also for the Afghan nation,” he exclaimed  “it is a big day of honor."


ISAF will not be completely reduntant until their time of departure next year. Nato chief Anders Fogh Rasmussen stated "we will continue to help Afghan troops in operations if needed, but we will no longer plan, execute or lead those operations, and by the end of 2014 our combat mission will be completed."

Furthermore, both humanitarian aid and international funding will continue to suport Afghanistan after the international troops have left.

As it stands, ISAF have close to 97,000 soldiers operating in Afghanistan, around 68,000 of which come from the US. Afghan troops currently amount to about 350,000, which has increased by a considerable amount over the past six years (by some 310,000). ISAF's goal is to have all of the international combat soldiers replaced by Afghan forces by the end of 2014, with only a small contincency remaining for the purposes of training. However this still has to receive final approval from Afghan government officials.

There is still much to be done over the next year, and Rasmaussen himself made reference to the "hard work" that still lies ahead for ISAF troops. However today's ceremony signified the sucessful move into the final phase of preparation before Afghanistan receives its independence.

The ceremony did not pass without a shadow of terror however. The occasion, received joyfully by many, was marked by the vehement inteference of Taliban rebels. Just 90 minutes before the ceremony began, a suicide bomber made an attack in west Kabul, taking the lives of three employees from the Afghanistan Independent Human Rights Commision, as well as injuring 30 others.

It is believed that the bomber was targeting Haji Mohammad Mohaqeq, a prominent politician from Hazara, who managed to escape with some minor injuries.

The bomb occured just a week after two massive attacks made by Taliban militants; one on an airport on the 10th of June, and another suicide attack at a supreme court on the 11th of June.

In a further bid towards peace throughout the land, President Karzai announced that he is organizing a team to be sent to Doha, the capital of Qatari, where efforts will be made to enter into peace talks with the Taliban. His aim is to decrease the amount of factious attacks made by the Taliban on a regular basis.