Superman Theology, and Other Things My Kids Fight About 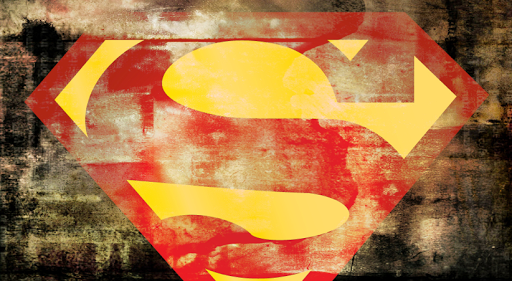 Jesus could shoot lasers out of his eyeballs if he wanted to, he simply chooses not to

My oldest two children are extremely and wearingly articulate.  At ten and eight years of age, they’ve spent the majority of their lives verbally trying to out-do each other in acts of holiness.  Lately, the spiritual bickering is mostly about hidden religious themes in Dr. Who episodes and whether or not clone armies have souls, neither of which would actually be the strangest theological debate they’ve had.
Once, about five years ago, the entire parish was treated to the following exchange before Mass: my daughter, five years old at the time, began praying aloud – and loudly.  Meanwhile, her three-year-old brother repeated everything she said, like this:
Five-year-old: “Dear God, thank you for my stuffed animals.”
Three-year-old: “Dear God, thank you for my stuffed animals.”
Five-year-old: “Thank you for my ponies, even though I’m missing four of them.”
Three-year-old: “Thank you for my ponies, even though I’m missing four of them.”
At this, my daughter opened one eye and glared at her brother.  “You don’t have ponies; don’t lie to God.  Stop copying me."
My son stared at her innocently.  “I’m not copying you.”
“You say your own prayer!”
“I am saying my own prayer!”
At this point, my husband and I separated the two of them, thinking the problem had been solved – that is, until the Our Father, when my daughter started to accuse her brother of copying her prayers again, this time with teary eyes. Communal prayers with her brother have never been a favorite of hers, which is one reason the family rosary is never a calming spiritual discipline around here.
Another time, while driving back from a trip to the Memphis zoo in 500-degree heat, the following conversation played out between the two siblings:
“Can Jesus shoot laser beams out of his eyeballs?” (This came from my son, who was probably about six at the time.)
I think the question was directed at me, but the eight-year-old daughter got to it first, in full scandalized fury.  “What?  Are you… ?  Jesus?  What?”  She was so outraged by the thought that she was reduced to spluttering.

My son glossed over her indignation, and repeated himself.  “Laser beams. Can Jesus shoot them out of his eyeballs?”
More choking noises come from my daughter.  Then, “He’s God, so if he wanted to shoot laser beams out of his eyeballs, then he could. But why would he?”  She didn’t actually say the word “duh,” because she knew she’d get in trouble, but the tone was so scathing, she didn’t have to.  Again, this was lost on her brother, who blissfully continued.

“So he could be like Superman. Superman shoots laser beams out of his eyeballs. He’s cool. He’s stronger than Jesus.”

This resulted in a full fifteen seconds of shocked silence before my daughter roared,  “Jesus is stronger! He’s God!”

“But Superman is extra strong.”  I glanced in the rearview mirror to see my daughter shaking her fists at her brother, while he leaned his head back on his seat and glanced thoughtfully out the window.

“Jesus is still stronger!”  My daughter caught my eye in the mirror and gestured for me to help out her cause.  I quickly glanced away and fiddled with the radio dial, trying hard to bite my tongue.

The five-year-old, sweetly merciless: “Could he lift up three people at the same time?”
“What?  He could lift up all the people in the world at the same time, and still have room left over in his hands.”

“Oh.” As my son ponders this, I risk another glance in the rearview mirror.
“Well,” he finally says, beaming at his enraged sister,  “I’m extra, extra, extra, extra, extra strong. So I’m stronger than Jesus. But I can’t shoot laser beams out of my eyeballs. Yet. But maybe if I ask Jesus, he will let me.” Judging by the look she shot him, I was guessing my daughter was praying for the exact same divine gift.
Parents receive an unfathomable education at the hands of their children.  I just didn’t expect the theology lessons to be so weird.