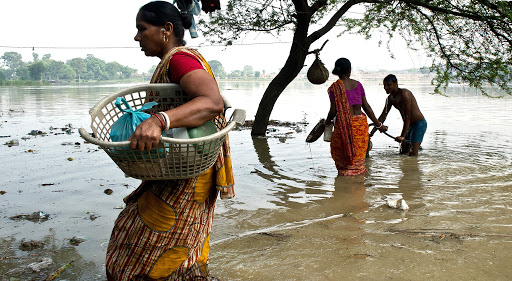 An unusually fierce monsoon season is causing misery for thousands of people in Kerala, in southern India, with high seas and strong waves washing away homes and preventing fishermen from putting to sea to make a modest living
In the last three weeks at least 20,000 people living in coastal areas have had their homes and possessions ravaged and destroyed by waves whipped up by monsoon storms.
“Thousands have been forced to seek shelter in a nearby school and parish church to sleep. We have lost our homes after the waves raided our coast,” said Geremias Kulas, 70, sitting in a local teashop in Valiyathura.
Kulas says the “depressing” rains have made him a man with “no money and no place to lie down.”
“How can I sleep on the floor? Nights are windy and chilly. My son’s family has moved to his in-laws,” he lamented.
There are thousands more like Kulas all along the Kerala coast, according to T. Peter, secretary of the National Fish Workers Forum, the largest fisheries union in the country.
In Thiruvananthapuram alone, "5,000 families have lost their homes. The majority are fishermen’s families, who live in abject poverty. Around 100 boats were lost and 500 were damaged. The monsoon has been deadly this year,” he said.
Most fisher families only survive because of their daily catch, so the monsoon season at the best of times is a difficult period for them because the rough sea keeps them from fishing.  As a result, lack of food, clean water and shelter make them prone to diseases, Peter said.
As a stopgap, the government only provides 600 rupees (US$10) per family during the two-month-long monsoon season.
“It’s a meager amount hardly enough for anyone to live on for two months. The monsoon steals all their savings and homes. They have to begin from scratch,” said Peter, who urged the state government to rebuild lost homes and rehabilitate the families.
Kerala fisheries minister K. Babu told ucanews.com that the government is doing something to help monsoon victims.
"We have set up 72 relief camps to accommodate displaced people in the state," he said.
“Free food and 2,000 rupees will be given to those in camps. Free rations for two weeks will be given to tribal families, fisherpeople along coastal areas and coir workers," the minister said.
Coir workers extract the fiber from the husks of coconuts to make rope and matting.
Many fishermen in the camps, however, doubt they will ever receive any money or other assistance.
“Every year the government promises many things. But once the monsoon is over, we have to run from pillar to post to get even the smallest thing,” said Antony Joseph, a fisherman in a relief camp in Valiyathura.
“Any relief would not be for us. It’s for officials and local politicians to make money. When we suffer, they make good money from our misery,” Joseph said.

Originally published at UCAnews on June 28 2013.  Used by permission, all other rights reserved