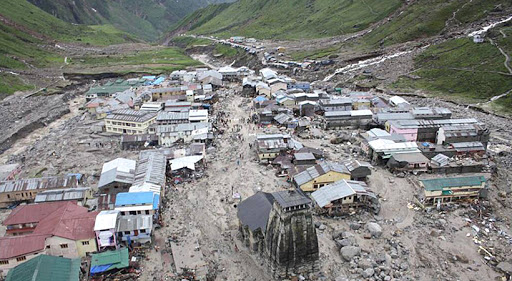 The Catholic Bishops Conference of India issued a June 21 statement voicing deep “solidarity” and “concern” for victims of severe flooding in the Uttarakhand region.
Heavy rains in the north part of the country have created floods that have claimed more than 600 lives and affected thousands more.
According to the Chief Minister Vijay Bahuguna, the death toll is expected to reach 1,000.
The devastating floods hit in June, in the Northern valley under the Himalayan Mountain range. Incessant torrents led the river basins to swell and overflow.
Caritas India, the Catholic bishops’ national aid organization, is working to provide relief efforts to those in need.
P.U. Francis, the north regional manager of Caritas India, told CNA that the current situation is “miserable,” with continuous torrential rains and a high, mountainous geography that make travel difficult.
About 70,000 pilgrims and locals who were trapped in the area are being “evacuated,” he added, and more than 44 choppers and 10,000 army and paramilitary personnel are engaged in the rescue operations.
Francis warned that there is also fear of an “outbreak of disease” due to contamination and floating corpses, along with the lack of safe drinking water in much of the flooded area.
Mobile health clinics are being utilized, and Caritas India is working with local diocesan partners to supply safe water, basic food, clothing medicine and supplies, while calling for further donations to aid those affected by the flooding.
Originally published at Catholic News Agency on 24 June 2013.  Used by permission, all other rights reserved.