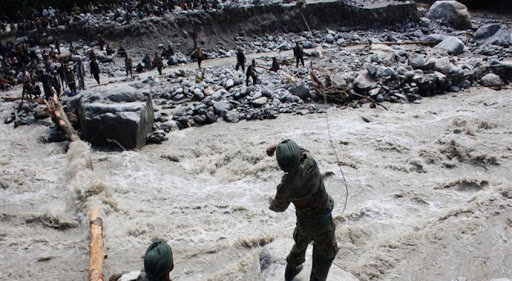 Many more may have perished in Himalayan disaster

The government suspended rescue operations in the flood-hit foothills of the Himalayas for a second day on Tuesday as heavy rains struck again, leaving about 10,000 Hindu pilgrims and tourists stranded.
With the death toll reaching at least 1,000, a new round of bad weather grounded army helicopters used in the rescue effort in areas around the holy city of Haridwar, close to Tibet and Nepal.
“Until the rain and winds stop we cannot start up the helicopters. It is very risky to use helicopters in this weather,” Chamoli district magistrate S A Murugesam said on Tuesday.
About 70,000 pilgrims have been rescued from temple sites around the Ganges River and its tributaries after torrential rain and flooding hit the area 10 days ago during the popular May and June holiday season.
But as many as 10,000 people remain stranded as roads have been washed away in this mountainous area, popular with Hindu pilgrims and tourists.
Caritas India, the social services wing of the Catholic Church, said its assessment teams deployed in Uttarakhand have recorded the destruction of more than 2,000 buildings, 1,000 roads and nearly 150 bridges as a result of the flooding.
Local media reports quoted government officials who feared the death toll could reach as high as 5,000 people after entire villages were washed away last week.
In Kedernath, one of four pilgrimage sites in the area, only its revered ancient temple was left standing.
“Everybody is worried about Kedernath, but there are many villages which have been washed away,” said Bishop John Vadakel of Bijnor which covers the area.
He added that many more thousands may have died in the flooding.
Officials said there were plans on Tuesday to hold mass cremations of the hundreds of bodies which have been lying around in some flood-hit areas for up to a week.
As the rescue effort has dragged on, residents have accused authorities of prioritizing tourists over locals, many of whom say that they have lost everything.
“We are the worst affected by the floods,” said Asha Sharma, whose house in Srinagar town was filled with three meters of mud when the nearby Alaknanda River, a tributary of the Ganges, broke its banks last week. “We have lost our property and valuables in the calamity.”
Many people affected by the flooding said they remain reluctant to go to relief camps set up in the wake of the tragedy because their valuables lie buried under mud and silt. Some have employed laborers to search for jewellery and other precious belongings.
Sangeeta Rayal, another Srinagar resident, said there was no prior warning ahead of the mudslide which left her home buried.
“What will I do? How will I remove the mud and start life again as normal?” she said.

Originally published at UCAnews on 26 June 2013.  Used by permission, all other rights reserved.