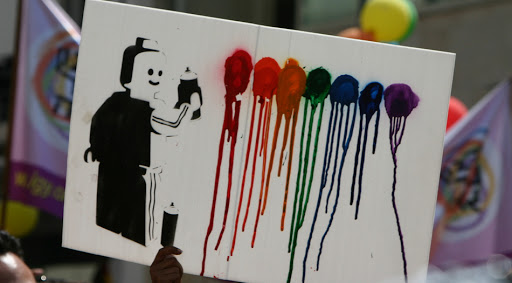 In some places, Church teaching is openly ridiculed

Homosexual students and culture are gaining acceptance at many Catholic colleges and universities across the United States. At least that's the conclusion of Michael O'Laughlin, a graduate of Saint Anselm College writing at Religion & Politics, on "Being Gay at a Catholic University."

The evidence is anecdotal and only pertains to four institutions: DePaul University, Santa Clara University, Saint Anselm College and The Catholic University of America. But O'Laughlin certainly comes up with eye-opening material at all but CUA, where he finds instead a strengthening Catholic identity that is at odds with the celebration of same-sex attraction.

Some selections from his report on each of the schools:

DePaul is the first Catholic school in the U.S. to offer a LGBTQ Studies minor. …Italian Professor Gary Cestaro, an openly gay Dante scholar, said that offering a space for dialogue and support for LGBT people is “very much in line with the culture and the mission of DePaul, which is social justice and serving the oppressed.” That emphasis is part of Catholicism’s social justice tradition, he added. “And while certainly these issues of sexual identity are complicated by other [C]hurch teachings, there is also a very strong case to be made for something like this being a natural part of this tradition.”

Paul Crowley, a Jesuit priest from Berkeley, California, teaches Santa Clara graduate students twice a week. …In 2004, Crowley published an article in the Catholic journal Theological Studies entitled “Homosexuality and the Counsel of the Cross.” He concluded that being gay isn’t a problem for the [C]hurch to contend with, but “an invitation to a different way of looking at things, and toward a deeper embrace of the very gospel that threatens to subvert our most cherished notions about the God whose name is Love.” Years later, the Vatican demanded that he issue a clarification that upheld [C]hurch teaching. …“When I teach my human sexuality course, I give my students the official [C]hurch documents, first without commentary, to read and then come back to class to discuss. They return and ask, ‘Is this serious? Do they really mean this?’ They just can’t believe it. That’s almost the universal reaction,” he said. But it wasn’t just students pushing for change. “There were students and faculty pushing along this change, sure,” he said, and there was also “encouragement from some of the Jesuits, too.”

[College President Fr. Jonathan] DeFelice told me that in the time since my graduation in 2007, the college had made gains in recognizing the need for protections for LGBT community members, so it added sexual orientation to its non-discrimination policy. With unanimous approval of the 25 or so monks living on campus in the monastery, including one retired bishop, it had adopted a governing statement that called for diversity training for new students and residence life staff and created structures for any member of the community to report bullying or harassment. As I was sitting with DeFelice, I asked him if students were pushing for more change, demanding more from their church and college. He was silent for a moment. “I think they’ve mostly moved on,” he said.

The Catholic University of America

It had recognized a group for gay students in the 1980s, but then disbanded it when the group began advocacy work. It had included sexual orientation in its non-discrimination policy until 2006, when then-President David O’Connell, now the bishop of Trenton, NJ, had it removed. (O’Connell’s current bio on the CUA webpage lists his main accomplishments, including that he “strengthened the university’s historic Catholic identity and character.”) Earlier this year, the administration demanded that the Graduate Student Union also remove the sexual orientation protections from its constitution; and late last year, when CUAllies applied for official recognition from the university, its application was denied.