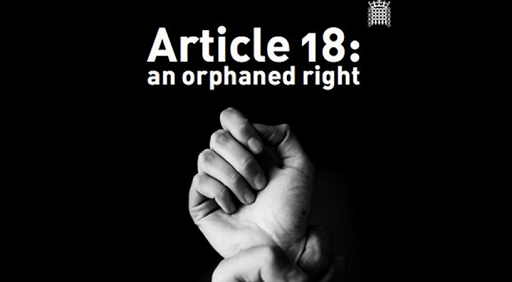 Article 18: ‘An Orphaned Right’ is introduced

The new report calls on the UK government to protect freedom of religion and belief around the world.
Parlaimentarians have called on the UK Government to take more action in response to the growing problem of religious persecution around the world.
The newly formed All Party Parliamentary Group on International Religious Freedom launched a report at the House of Lords today (Wednesday, 26 June), revealing that millions of people in 184 countries have experienced aggression or intimidation because their beliefs.
The report called on the UK Government to "help all those who suffer on account of their beliefs, regardless of what they might be" and made a number of recommendations including creating "an Ambassadorial level focal point on freedom of religion of belief".
While welcoming recent FCO work on the freedom of religion, Lord Singh of Wimbledon, one of the officers of the parliamentary group, wrote in his foreword to the report: "Our foreign policy will be severely hampered if we do not develop the understanding of distinctions and nuances between and within different faiths."
He also challenged ideas that religion is no longer a significant force in world societies, saying: "Religion affects the whole of life, from profound philosophical beliefs about our responsibilities in society, to simple everyday choices about attitudes to the food we eat."
The report Article 18: An Orphaned Right states that this article of Universal Declaration of Human Rights "remains the benchmark against which the enjoyment of the freedom of religion or belief should be measured".
It goes on: "Article 18 states that freedom of religion or belief is a fundamental right which may not be derogated from, even in times of public emergency.
"Everyone has the freedom to manifest their religion or belief, either alone or together with others, publicly or privately.
"Nobody is to be subject to coercion that would impair the individual's freedom to have or adopt a religion or belief of their choice, nor is discrimination on the grounds of religion or belief permissible."
But, the report highlights that almost 75 percent of the world's population live in countries with high levels of government restrictions on freedom of religion or belief, or where believers face high levels of hostility.
Article 18: An Orphaned Right, written by academics from leading UK universities, draws on testimony delivered to politicians by representatives from a range of human rights and faith-based groups, including Catholic charity Aid to the Church in Need which is helping to sponsor the parliamentary group's work.
Baroness Berridge, the chair of All Party Parliamentary Group on International Religious Freedom, said: "It is a basic human right that any man or woman should be able to follow the religion of their choice, change their religion, or eschew religion altogether.
"We look forward to hearing the Government's response to these recommendations, and assisting in any way we can to achieve them."
John Pontifex, from Aid to the Church in Need, who gave verbal and written evidence for the report, said: "Baroness Berridge and her group are to be congratulated on this excellent report which clearly asserts religious freedom as an essential component of human rights and one that is being comprehensively ignored in so many countries.
"However the crucial test for the group is to persuade the Government to make religious freedom a priority and to use Britain's international clout to put pressure on other countries to stop persecution not just against Christians but against all faith groups."

Originally published at Aid to the Church in Need on 26 June 2013.  Used by permission, all other rights reserved.