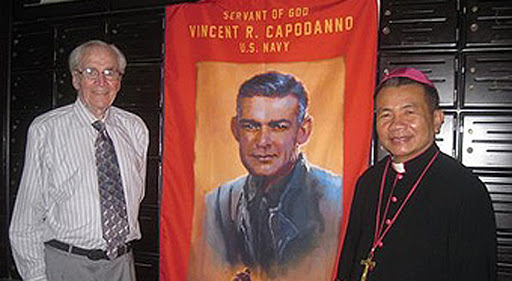 Bishop Joseph Chau Ngoc Tri of Da Nang recently said Mass in honor of Father Vincent Capodanno, a U.S. chaplain killed during the Vietnam War, and encouraged his people to ask the priest's intercession.
Ted Bronson, a retired Navy Captain, told CNA June 26 that Bishop Tri “is a brave bishop, fostering Capodanno under the umbrella” of Vietnamese communism.
The Mass, said on June 14, marked the 55th anniversary of Fr. Capodanno's priestly ordination. Fr. Capodanno was ordained for the Maryknoll Missionary order, and later became a chaplain for the U.S. Navy.
While with Maryknoll, Fr. Capodanno served in Taiwan and Hong Kong, and then requested to be reassigned as a chaplain with the Marines. He was sent to Vietnam in 1966, and requested an extension to his tour of duty when it was up.
On Sept. 4, 1967 his unit was in the Que Son Valley near Da Nang, and became outnumbered by North Vietnamese forces. As American soldiers were being gunned down, Fr. Capodanno went about giving Viaticum and Anointing to the dying, and medical aid to the wounded.
Shortly after reassuring a wounded Marine, Fr. Capodanno went to another soldier who had called out for help. Both he and the solider were shot, and died. He was awarded the Medal of Honor in 1969.
His citation for the Medal of Honor says he “left the relative safety of the company command post and ran through an open area raked with fire … disregarding the intense enemy small-arms, automatic-weapons, and mortar fire, he moved about the battlefield administering last rites to the dying and giving medical aid to the wounded.”
“Upon encountering a wounded corpsman in the direct line of fire of an enemy machine gunner positioned approximately 15 yards away, Lt. Capodanno rushed a daring attempt to aid and assist the mortally wounded corpsman. At that instant, only inches from his goal, he was struck down by a burst of machine gun fire.”
“By his heroic conduct on the battlefield, and his inspiring example, Lt. Capodanno upheld the finest traditions of the U.S. Naval Service. He gallantly gave his life in the cause of freedom.”
According to Beth Crumley, a writer at the Marine Corps Association and Foundation, Fr. Capodanno had written his commander shortly before his death, “I am due to go home in late November or early December. I humbly request that I stay over Christmas and New Year’s with my men. I am willing to relinquish my thirty days leave.”
Fr. Capodanno's cause for canonization was opened in 2002, and he is designated a Servant of God.
“To move the cause forward, hopefully soon into the Roman phase, the Archdiocese for Military Services has launched the Capodanno Guild,” Judy McCloskey, a member of Mission Capodanno, told CNA June 25.
“Several alleged miracles are being reviewed for consideration” of the cause, she added.
The June 14 Mass was held in Da Nang's cathedral, and drew at least 500 participants, both Vietnamese and Americans. It was organized after Bronson visited Da Nang and Bishop Tri last August.
Bronson called the Mass “more than I could have dreamed,” attributing its success to the intercession of his guardian angel, as well as that of Fr. Capodanno.
He described the challenges facing the Mass, which came from Vietnam's communist government.
The agents who visited Bishop Tri leading up to the Mass “objected the first time to 'U.S. Navy' being displayed on the banner. At their second visit, they objected more strongly to the image of Fr. Capodanno on the battlefield. That's why we did not process the banner at the Mass.”
Present at the Mass were three policemen, Bronson added.
Yet “Bishop Tri told me he will repeat this Mass every June 14 with these words: 'It will be easier next year.'”
“This is all that I could pray for,” Bronson reflected.
He added that Bishop Tri intends to mention Fr. Capodanno to Pope Francis in his next ad limina visit, scheduled for 2014.

Originally published at Catholic News Agency on 29 June 2013.  Used by permission, all other rights reserved.