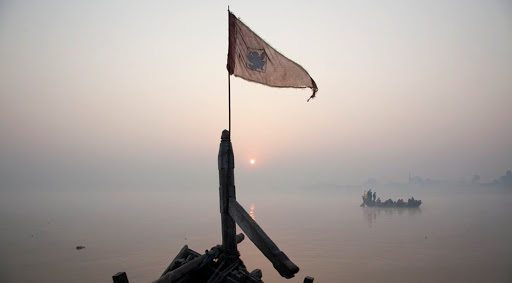 They looked devastated, grief-stricken and tired as they emerged from an Indian Air Force rescue chopper as it landed in Gauchar.
Ram Avtaar Singh was soon searching for a bus that could take him home to Meerut, Uttar Pradesh.

“The situation is very bad. There were bodies all around us. I was lucky… could not have asked for more from God,” said Singh with folded hands and tears in his eyes.

He was rescued from Kedarnath on June 26, eleven days after heavy rains and flash floods hit Uttarakhand state in the foothills of the Himalayas, reportedly killing at least 1,000 people and leaving thousands more stranded.

The state is home to a host of Hindu holy pilgrimage sites.

Singh was among thousands of pilgrims who had come for the char dham yatra (visit to the four religious places) in Uttarakhand.  Many like him believe their gods saved them.

“Shiva saved us. He took all the impact of the water on him and saved us,” said Teerath Hari, a Hindu monk who was inside a Kedarnath temple when the calamity struck.

Hari, along with six other monks, trekked for four days to reach Gauchar and saw many bodies being carried away by the surging floodwaters.

“The bodies were passing like logs of wood. Vehicles that had been parked in Kedarnath seemed like toys in the water. It was very bad,” he said.

As well as Kedarnath, Hemkund Sahib, a Sikh pilgrimage site situated at an elevation of 4,632 ms was also destroyed beyond recognition.

Kanwaljeet Kaur, a Sikh woman, said she and her 12 family members ate nothing for five days before they were rescued and brought to Badrinath, where they were given food at relief camps set up by the government and aid agencies.

While the army picked up women and children in choppers, the men had to trek through difficult terrain guided by soldiers.

“Bridges had collapsed so we had to cross a gushing river by rope. It was frightening. I thought I would never see my family again,” said Sukhwinder Singh, Kaur’s husband.

“There were long queues of pilgrims waiting to board choppers which could only carry up to eight people. It was not possible for all to come by chopper," said Singh who trekked 22 kms.

"There seemed to be enough food and water available, but no efficient way to get it to stranded pilgrims. Food parcels were being dropped and there was a mad rush to retrieve them, resulting in many injuries,” said Mahesh Prajapat, a pilgrim rescued from Kedarnath.

Amid the rescue efforts, there were horrifying tales of exploitation by locals, said Kiran Mahajan, who had to hand over a gold earring to buy a bottle of water for her son.

“I had nothing but some jewelry I was wearing. I had no other option. My son would have died of thirst otherwise,” she said, on the verge of tears.

But local people have their own worries. Most people like Sangeetha Rayal say they have been "left with nothing" because everything they had is buried under about three meters of mud and silt.

"Every year the floods come and go but this time a raging river took away our house, animals, everything," she said.

“We were neck deep in water in the middle of night and had to swim for our lives. Everything was washed away in minutes,” Rayal, 38, sobbed.

“We have nothing to eat or drink. There is water everywhere but very little clean drinking water,” said Harish Negi, one of around 100 residents in the Pauri district, in the Srinagar area, whose houses were covered with mud.

There are now fears of a possible epidemic as rotting dead animals are everywhere,” said Negi who had covered his face with a mask. The smell of decomposing corpses is all around us, he added.

Negi and his neighbors have started digging through the mud covering their houses.

“We are trying to find if there is anything left,” Negi said.

Officials say the floods were the worst in living memory and that 15 districts in the state were ravaged by the floods.

"More than 500,000 people in around 600 villages have been affected," said Chandresh Kumar, Magistrate of Pauri district.