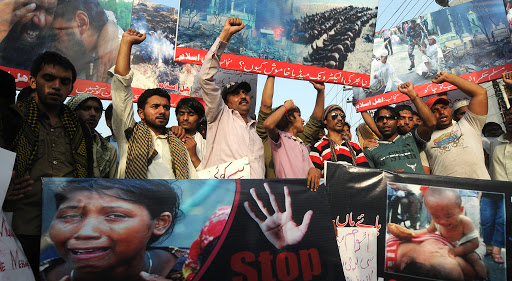 Police have detained two suspects in connection with an alleged rape which sparked fresh anti-Muslim violence in western Myanmar’s restive Rakhine state on Sunday night.
“The suspects are now in police custody and … an official investigation is underway,” said Kyaw Soe Lwin, the administrative chief of Thandwe Township, who declined to give any further details on the alleged attack.
At least 50 Buddhists surrounded the police station on Sunday night demanding that swift justice be meted out against the suspects, who are Muslims, he said.
The mob later attacked Muslim houses with stones before burning them, he added.
No deaths or serious injuries were reported.
Authorities have imposed a curfew from 7pm to 4am and deployed security forces throughout the city famous for its pristine beaches.
“The situation is quite calm now. It’s going back to normal, I am sure. We will not tolerate any further violence in the town,” Kyaw Soe Lwin said.
However, Muslim’s whose homes were burned down in the attacks accused the authorities of deliberately standing by and letting the attacks take place.
Myo Thit, a local Muslim businessman whose house was attacked and who sustained minor burns, said yesterday that the mob had thrown petrol bombs through the windows while he and his family were still inside.
“The police and army were standing nearby. But they did not prevent the crowd from attacking our house. Only at the last minute when it looked like we might die, did police come and take us to the police station,” he told ucanews.com.
“We feel very unsafe. I spent last night with my family at the police station. I’ve heard the police have been ordered to arrest the arsonists, but they have not arrested anyone.”
Presidential spokesman, Ye Htut, later wrote on his Facebook page that the situation in Thandwe has returned to normal and that the authorities were taking appropriate legal measures against the rape suspects.
Deadly violence between local Buddhists and minority Rohingya Muslims erupted in Rakhine state in June last year over the alleged rape of a Buddhist girl by Muslim men on a bus.  The violence later spread to other cities across the country, killing at least 250 people and displacing more than 100,000, most of them Muslims.

"Originally published at UCAnews on 01 July 2013.  Used by permission, all other rights reserved."