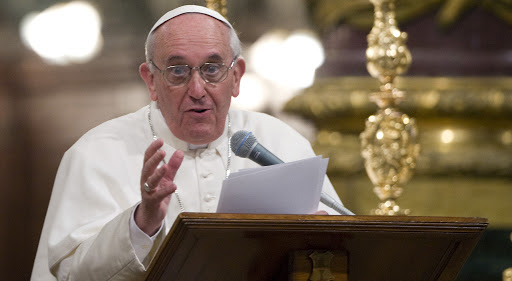 Daily homily from the Bishop of Rome

During daily Mass on Thursday, Pope Francis explained that Christians are free because of Jesus, who gives them their identity as God’s children.
“We are saved in Jesus Christ and no one can take from us this identity card,” said the Pope at the chapel of the Vatican's Saint Martha House. “Civil status: we are free!”
“This is how I identify myself, as a child of God; what a beautiful identity!” he remarked during his homily July 4.
The Pope explained that we are free because Jesus “made us sons, with the liberty of sons” and that because of what he did, we can call God ‘Father.’
“We, who were slaves of sin, he has made us all free, he has healed us at the very core of our existence,” said the Pontiff, who celebrated Mass alongside Cardinal Telesphore P. Toppo, the Archbishop of Ranchi, India.
During his homily, the Pope reflected on the Matthew 9 account of Jesus curing a paralytic. The scribes did not believe Christ had forgiven the man’s sins and accused him of blasphemy.
“The healings, the teaching, the strong words against hypocrisy were only a sign, a sign of something more that Jesus was doing, namely, the forgiveness of sins,” Pope Francis said.
He explained that reconciliation with God was Christ’s “most profound miracle and mission” and meant “the re-creation of the world.”
It is a great miracle that we are now free to call God our “Father” with “so good and so beautiful an attitude,” he said.
“Jesus does this not with words, not with gestures, not walking along the street, no, he does it with His flesh!” he exclaimed.
“It is he himself, God who became one of us, a man, to heal us from within; he came to us sinners,” the Holy Father stated.
He stressed that God’s forgiveness gives Christians freedom and courage, adding that we can now understand why Jesus told the paralytic “courage, child, your sins are forgiven.”
“That is the root of our courage, I am free, I am a child, the Father loves me, and I love the Father!” he remarked.
“God has reconciled the world to himself in Christ, entrusting to us the word of reconciliation and the grace of bearing this word of reconciliation onward, forcefully, with the liberty of children,” the Pope said.
He explained that Jesus frees us from sin by making himself sin and taking upon himself all the sin of the world.
“This is the new creation,” he said. “Jesus comes down from glory, humbles himself, even unto death, death on the cross.”
“Even to the point of crying out, ‘Father, why have you abandoned me?’,” the Pontiff observed. “This is his glory and this is our salvation.”
He underscored that we would do well to think how beautiful it is to be children, and how beautiful this liberty of children is.
“The child is in the house, and Jesus has opened the doors of the house to us,” he said. “Now we are in the house!”

Originally published at Catholic News Agency on 05 July 2013.  Used by permission, all other rights reserved.