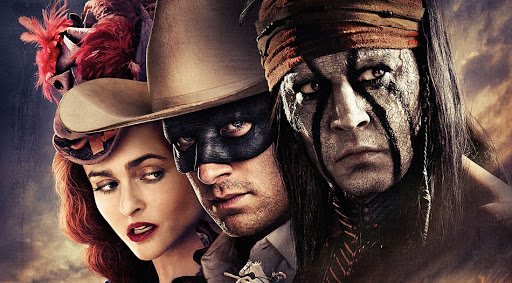 Look, I'll admit that almost every bad thing you're going to hear about The Lone Ranger is going to have an element of truth to it. Yes, the movie's too long by at least half an hour, meaning you'll probably check your watch once or twice before it's over. Yes, it's somewhat schizophrenic, feeling at sometimes like a whimsical homage to old Hollywood westerns and at others times like a Disneyfied version of HBO's Deadwood. And yes, because it's a film directed by Gore Verbinski, the same man who brought us the first three Pirates Of The Caribbean films, some of the action scenes are profoundly over the top and don't make the slightest attempt at grounding themselves in reality. It's all horribly, horribly true.

But darn it if I didn't start grinning like an idiot anyway once the William Tell Overture began playing. I just couldn't help it. I don't know, maybe I'm getting to be a soft touch in my middle years, or maybe I'm just going through one of those periods where a few hours of frivolous escapism is enough to justify the exorbitant cost of a movie ticket, but for whatever the reason, much like with other recent films such as Man Of Steel and The Heat, I found myself pleasantly entertained by a movie I know without a doubt a lot of my peers in the review business are going to savage. But what the heck, I'm also the guy who liked Starship Troopers, so at least I'm consistent, right?

Now that we've established that this review has no credibility, why don't I just tell you what I enjoyed about this over bloated, occasionally disjointed, and always loud movie. For one thing, the film is surprisingly and unashamedly proud of its roots, with a hero so strait laced and square jawed that he could have leaped right out of the original radio serial. Now he doesn't start out that way, of course. Much like Kal-El in Man Of Steel, it takes a little time for our hero to become the total package. In fact, as the movie begins, it throws a bit of a narrative curve ball with a scene that implies our perceptions of who the Lone Ranger was might actually be all wrong. The film starts with a young boy attending a carnival in 1933 (the year The Lone Ranger first aired) where he meets an impossibly old Tonto (think Dustin Hoffman in Little Big Man) residing in a sideshow attraction. His memories stirred by the store bought Lone Ranger mask the child is wearing, Tonto begins to tell the true story behind the legend, beginning with the day he and his famous partner robbed a bank.

The child is appropriately aghast at hearing this, because as everybody knows, the Lone Ranger would never do such a thing. Cryptically responding that there are times when a good man must wear a mask, Tonto turns the tale a bit further back to the time when he first met John Reid, the man who become the Lone Ranger. A highly educated lawyer, John has decided to return to his home town to help bring law and order to a west that has yet to leave its wild days behind. Also on board the same train are two prisoners, Butch Cavendish, the meanest and most wanted criminal in the country, and Tonto, an Indian who has been put in chains for reasons nobody seems to know. When Cavendish's gang stages a breakout attempt aboard the still moving locomotive, John ends up in a three way standoff with the prisoners, first holding a gun on Cavendish to stop him from taking flight, and then on Tonto to prevent him from murdering Cavendish. As John explains, his first concern is justice, and no man, no matter how evil, can be executed without a fair trial.

Because John refuses to gun Cavendish down in cold blood (much to Tonto's disgust), the criminal makes good his escape, leaving John and Tonto to face certain doom on the runaway train. After miraculously surviving the crash, Tonto is summarily locked in jail while John insists on joining the posse organized by his older brother Dan, leader of the Texas Rangers in the region. Unable to convince John to stay behind, Dan deputizes his little brother and offers him a gun, which he immediately refuses to take on principle. Tracking the bandits into the desert, the Rangers are betrayed by one of their own and led into an ambush where all of them are shot and left for dead. Tonto, who has mysteriously escaped jail (something mystical is implied), arrives and begins to bury the bodies of the slain Rangers, but is interrupted when he reaches the not quite dead John by the arrival of a mysterious white stallion. Though Tonto argues vehemently with this "spirit horse" that he is making a terrible mistake by selecting to return full life to the bumbling John instead of the valiant Dan, the horse insists and Tonto performs the necessary ceremonies. After John's "resurrection", Tonto suggests that the best course of action would be to allow Cavendish to believe John is still dead and to pursue the criminals anonymously. John reluctantly agrees to go along with the idea, but only if Tonto likewise agrees to bring all the gang in alive to stand trial.

And so the Lone Ranger we all know and love (or have at least heard our parents talk about), that mysterious masked man dedicated to establishing law and justice in the old west, but never through the intentional taking of human life, begins to take shape. We're still only about 1/4 of the way through a two and a half hour movie, though, so John still has some ordeals to experience before becoming the paragon of frontier justice legends tell us he is (you'll know that moment has arrived when the appropriate music starts). To recount everything John goes through would require us to be here for quite awhile. Needless to say, much as they did with the Pirates Of The Caribbean movies, Verbinski and his writers throw in everything they possibly can into the remainder of the movie's running time. There's an overabundance of action (kidnappings, clashes between the U. S. Calvary and the local Indian tribes, and a finale aboard two speeding trains that breaks all known laws of physics) and a bevy of bizarre characters (a bandit with a penchant for wearing women's clothing and a prostitute with a double-barreled porcelain leg come to mind). Plus there's considerable time spent dropping clues (the cannibalistic killer bunnies being my favorite) to a larger story involving an imbalance in nature the filmmakers obviously hope will be told in potential sequels.

And in the middle of all that, the movie still manages to work in a lengthy origin for Tonto as well, which brings us, inevitably, to Johnny Depp. Unless you've managed to avoid all imagery from the film, then I'm sure you've seen Depp in his Tonto get-up, his face covered in white warpaint and a dead bird perched atop his head. With that visual combined with the character's weird affectations, it would be easy to write off the performance as little more than an attempt to duplicate the crowd pleasing success of Depp's Captain Jack Sparrow from the Pirates movies. That wouldn't be quite fair, though. The paint is necessary, I suppose, to help the obviously white actor avoid playing the role in potentially insulting "red face" (they did manage to get real Native Americans for the rest of the Indian roles by the way) , and as for the bird, it's actually given a specific plot point for being there. In fact, it's the story behind the bird which not only reveals why Tonto acts as strangely as he does, but also sets up some conflict between Tonto and John as they pursue the bad guys.

You see, in his quest for vengeance against Cavendish, Tonto has come to believe that justice cannot be provided by any authority, but is rather something that a man must take for himself. John has a clearer, more Catholic understanding of the principle of justice, however. He understands that justice must be tempered with charity, and that it "requires that all persons (even the bad ones) should be left in the free enjoyment of all their rights." So even by the end of the movie when John discovers a corrupt authoritative power structure has been put in place to subvert justice, he doesn't abandon his principles to bring it down, but only seeks to reinstall true justice to its proper place. He finally becomes the hero and he earns his fanfare. And corny as it is, it made me smile when the trumpets started up.

So, no, the movie isn't good on a number of artistic points, there's no arguing that. But it does entertain and it does give us a hero, however bumbling he might be starting out, that deserves to be called as such. I'm willing to forgive its faults for that.