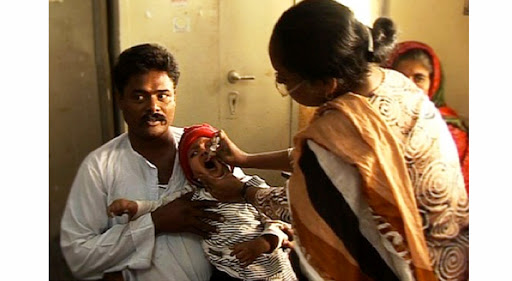 Islamic groups in Pakistan have issued a unanimous edict proclaiming polio vaccines safe. This comes in response to a number of attacks on aid workers by the Taliban, which claims that the immunization program is run by US spies.
The Sunni Ittehad Council, an alliance of mainstream Islamic groups, made the pronouncement according to sharia law on Wednesday, the same day a woman polio worker was shot dead by suspected militants in northwest Pakistan.
“Some misguided people, who are creating the risk of children becoming handicapped due to their resistance against polio programs, are inviting the wrath of the Almighty,” the edict said.
About 20 aid workers have been killed in Pakistan due to the Taliban campaign which started a year after the raid in May 2011, which led to American forces killing Osama bin Laden.
Shakil Afridi, a physician, used a polio vaccine campaign as a ruse to get the DNA of bin Laden family members inside their compound in Abbottabad which allowed the US to pinpoint the al-Qaeda leader’s location.
It is estimated that about 260,000 children have not received the vaccine in the tribal areas of North and South Waziristan where there is a strong Taliban presence.
Many areas are considered too dangerous to continue polio vaccine programs even though many aid workers in Pakistan have been given police escorts.
Some Islamic extremists in the country have also stated that they believe the vaccination program is being used as cover to sterilize Muslims.
Pakistan is one of only three countries in the world – along with neighboring Afghanistan and Nigeria – where polio remains endemic.
Wednesday’s edict also warned that preventing access to the polio vaccine could lead to an international travel warning against Pakistan.
“We welcome the decree but we believe it won’t reduce the threat unless people from all schools of thought condemn attacks on polio workers,” said Dr Nima Saeed, the acting head of the World Health Organization in Pakistan.

Originally published at UCAnews on 05 July 2013.  Used by permission, all other rights reserved.