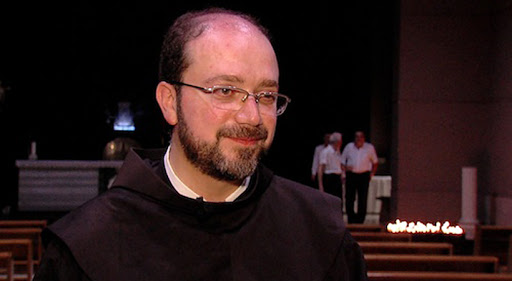 Franciscan Friar Ibrahim Alsabagh says that remembering the June 23 killing of his friend, a Syrian priest, at a Mass in Rome made him feel “bitter, happy, and a little bit of envy," as well as "how close martyrdom is."
“My first reaction was of bitterness because I had met him personally and I know how much good he did,” said Father Alsabagh, a Syrian Franciscan of the Custody of the Holy Land. “Also because it made me realize how close martyrdom is.”
“But on the other hand, I also felt joy and a little bit of envy,” he told CNA July 4, following the memorial Mass for Father François Mourad, held in Rome.
The evening Mass was celebrated by Bishop Matteo M. Zuppi, an auxiliary bishop of the Diocese of Rome, at the Church of Saints Fabian and Venantius.
During the Mass, which was held to pray for the priest and all of the victims of the conflict, Fr. Alsabagh spoke about the war, the growing faith of young Christians in Syria and about Fr. Murad’s death.
Initial media reports falsely informed that Fr. Murad was beheaded in an attack that was recorded on video, showing a group of foreign jihadist militants beheading two men in Syria.
But Vatican sources later confirmed the 49-year-old was in fact shot dead in the Christian village of Gassanieh near Jisr Ash-Shughur in northern Syria, after rebels raided the monastery where he was living.
“There are many news (reports) involving his death, one of them is that he received a bullet when he was inside the monastery,” Fr. Alsabgh said.
“Another story is that he was assaulted by a group that wanted to loot the monastery and that they killed him,” he stated. “This story wasn’t disseminated immediately by the mass media, and it was later confused with a movie published in YouTube that shows the beheading of a priest with other two lay people.”
Fr. Alsabagh stressed the truth was that he was not beheaded but shot in the monastery.
“He was gentle and docile, he was a Franciscan that always aspired to initiate a monastic path,” he said.“He always helped in our mission, and we always considered him as one of our brothers.”
Fr. Murad initially wanted to open a monastery close to Aleppo and base its spirituality on Saint Siemon the Stylite.
But Fr. Alsabagh said that because of “many difficulties,” Fr. Murad went to live in the monastery of Saint Anthony of Padua in Ghassanieh, which is where he was killed.
“We, Franciscans of the Holy Land, are also always called to testify to our faith in the Middle East, even to the point of martyrdom,” he remarked.
Fr. Alsabagh, who was studying for a doctorate in Rome, traveled to one of the three Franciscan monasteries in Damascus on July 5 “to help and support his brothers in the mission.”
“I’m returning there to be with my brothers and to live the testimony,” he said. “There are probably so many dangers; there is no security in the capital, on the streets, not even in the monastery.”
“One can be killed in any moment but so many people expect our strength, our bravery, our prayers and our homilies,” he stated. “They expect words of faith, as well as the sacraments.”
He underscored the Franciscans’ mission in Syria is to be “brothers of the people, to be with the people, and to serve the (Syrian) people.”
After spending the next two months in Syria, he plans to return to Rome in September to continue his doctorate.
According to him, since the violence began there is “more sensibility regarding the Christian life” in Syria.
“When there is the cross, there is something that moves and pushes you more; there is a force that springs so much from within to the outside,” he remarked.
“When one lives in prosperity, there is a big danger and indifference becomes the result,” he added.
“Instead, a little bit of suffering, a little bit of the cross on the shoulder, helps us open our eyes a bit to the importance of our Christian vocation and to its beauty.”
Fr. Alsabagh noted suffering “also helps us respond generously to our Christian vocation, helps us realize that everything passes, that it’s important to stick closer to Jesus and to be ready at every moment to give your life for your brothers.”
“I’ve shared this suffering by listening to my family, friends, priests and brothers,” he said. “It’s made me realize that my martyrdom could come today or tomorrow, too.”
“We need to do what the Pope says: close this passageway of weapons into Syria,” he affirmed.

Originally published at Catholic News Agency on 8 July 2013.  Used by permission, all other rights reserved.