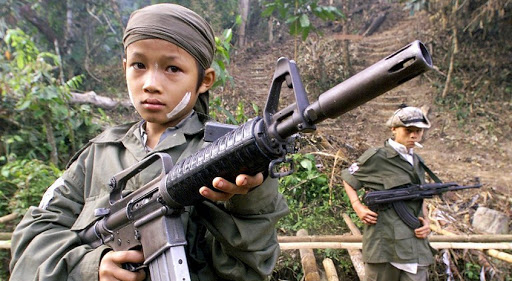 Myanmar has released 42 child soldiers from its armed forces following pressure from the UN to accelerate efforts to eliminate the practice as the country emerges from military rule.

Ashok Nigam, UN resident coordinator said: “We are very happy for the 42 children and their families today but we must accelerate efforts so that many more children benefit from release."

"We expect the Tatmadaw [Myanmar army] will now be in a position to speed up the release of all children," he added.

According to the UN’s statement, 34 of those freed were under 18 while the remaining eight were young people who had been recruited as children. They had performed soldiering and other duties.

For decades, the recruitment of child soldiers has been a persistent issue for the country’s armed forces, which remains engaged in fighting with a number of ethnic insurgent groups.

Myanmar’s reformist government agreed to register all children in its forces by November last year and release them from service by December.

But the registration process is “far from complete”, Human Rights Watch (HRW) said, and the Myanmar military has failed to remove incentives to fulfill unit quotas that encourage child recruitment.

On at least four occasions, Myanmar’s armed forces have also refused UN access to military facilities, according to a New York-based HRW report released on May 28.

Aye Myint, a rights activist who has helped many families track down their children who were forcibly recruited into the army, said today: “We don’t know how many child soldiers are still in the army and are not sure if the army has completely abandoned its policy of recruiting children by force.

“These cases have sharply gone down in major cities like Yangon. But I still receive complaints about forced recruitment from countryside areas,” he said, adding that the government should also release all former child soldiers who fled from army bases and were later arrested and jailed on charges of desertion.

The Myanmar army released 42 children in September 2012 and a further 24 in February under an agreement with the UN.

Ye Htut, the president’s spokesperson, had told ucanews.com on May 29 that “the issue has not been totally sorted out and still persists on the part of the Tatmadaw and ethnic armed groups. We are cooperating with the UN to resolve this.”

There are no verifiable current figures for child soldiers in the army, but more than 520 have been returned to their families since 2006, according to UNICEF.

Originally published at UCAnews on 9 July 2013.  Used by permission, all other rights reserved.