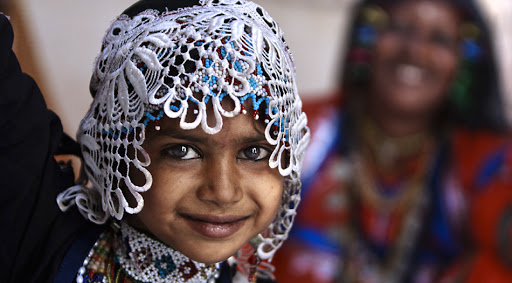 Elders do away with custom that causes misery, even deaths

India's desert state of Rajasthan has the highest record of dowry-related deaths in India, but a Muslim dominated village’s daring break with the problematic tradition 20 years ago has netted results.
As the village celebrated its 350th dowry-free marriage last week, its contrarian elders are gaining admiration.
The village of Kheerva in Rajasthan's Sikar district, home to 10,000, follows a system of marrying within the village. Locals say this has helped them implement their no-dowry rule, which was introduced in the early 1990s to counter the extravagance and social disparity that had begun to surface.
Until then, most inhabitants were of a similar socio-economic status as a preponderance of them worked for the army. But during the late 1980s, some migrated to find more lucrative jobs in the Arabian Gulf states and a class of wealthier families began to emerge. As a result, the village became stratified along income lines, and the wealth of the newly rich was flaunted, often at weddings.
The fatal effect that dowries can have on family life should not be underestimated. India last year recorded around 8,000 dowry-related deaths, or nearly one an hour, according to the National Crime Records Bureau; 478 of these occurred in Rajasthan, making it the most prolific state.
Most often, wives are driven to suicide as husbands make excessive and unyielding dowry demands. In-laws who do not receive a promised dowry have been known to murder the wife.  The damaging effects of the dowry culture are so bad as to be the leading cause of female feticide. Despite the fact that the dowry custom is actually illegal in India, only 39 cases were heard last year under the Dowry Prohibition Act. Meanwhile, the problem remains as entrenched as ever.
The Kheerva elders could not stand to see this continue. “In the early 1990s, we decided to do something against the increasingly lavish wedding parties thrown by some rich families,” says Allah Noor, a village elder.
“A village meeting was called and it was decided to completely ban the giving or taking of dowries.”
Since then, the ban has been strictly enforced with all families, whether rich or poor, willingly complying with it, Noor said.
But the villagers have not dispensed with it altogether. A token sum of 2,100 rupees (US$35) exchanged at the wedding is still acceptable for those who don't want to break with the tradition entirely.
And the effect has gone far beyond just the survival of women, says Ghulam Ali Pathan, president of a state-level voluntary organization working for children's education.
“Yes, there is more money left to educate our girls and indeed a lot of girls from the village are currently pursuing higher education in big cities like the state capital, Jaipur,” he says.

"Originally published at UCAnews on 10 July 2013.  Used by permission, all other rights reserved."