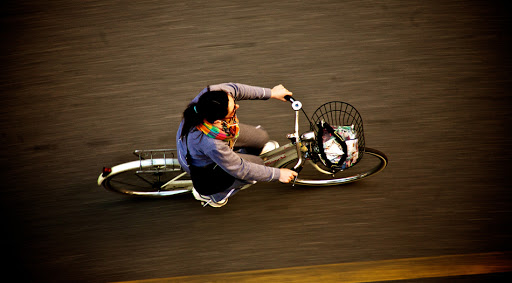 “I think that bicycles are necessary because there’s a lot of work to do and you have to move around but get a humbler one!” Pope Francis told seminarians and novices July 7 in the Vatican’ s Paul VI Hall.
“And, if you like that beautiful car, think about how many children are dying of hunger, just (think of) that!” he told the approximately 6,000 young adults.
Pope Francis met with the young seminarians and novices to mark the end of their four-day pilgrimage to Rome sponsored by the Vatican as part of the Year of Faith.
“I’m telling you, truly, it hurts me when I see a priest or a sister with a brand new car. But you can’t (do that), you can’t!” he commented.
“Now, you’re thinking, ‘but then, father, must we go by bike?’” the Pope asked. “Bikes are nice,” he replied, noting, “Monsignor Alfred goes by bike, he does it.”
The pontiff also advised them to always be coherent in living out their vocation so that their testimony will be credible.
“True joy doesn’t come from things. No, it is born of an encounter, of the relationship with the other,” he said.
“It’s born of feeling ourselves accepted, understood, loved and of accepting, understanding and loving,” the Pope said. “And this is not for interests of the moment but because others are people.”
He underscored that joy is born from the freedom of an encounter and of “feeling yourself saying, ‘you are important for me’ and not necessarily with words.”
“This is wonderful and it’s precisely God who helps us understand this,” he said.
Previously, during a morning Mass in Saint Peter’s Basilica, he told the seminarians and novices they are in a “beautiful season” that represents “the moment of betrothal; the spring of vocation; the season of discovery, assessment, formation.”
He also stressed on the importance of joy, the cross and prayer as the mission of Christians.
A novice from the Congregation of Sisters of Nazareth in London told CNA July 4 that the first day of the pilgrimage was a “very good and lovely experience.”
“It’s beautiful, I don’t even have words to explain how beautiful,” said Sister Siponda Mary Agnes, who is originally from the island of Samoa.
“We’re very lucky and very privileged to be here, because this is the new Pope and everything is just beautiful,” she added.
Deacon Felipe de Jesus Varela Lopez from the Diocese of Guadalajara, Mexico said that vocation is the call that God gives to each of us “to be happy and to love.”
“It’s through the priesthood that I can fully love God and help people get to know him, so they can live life to the fullest,” he explained.
“This pilgrimage is a renewal and a confirmation of my vocation,” he added as he stood outside Castel Sant’Angelo.
“I think everyone is in love with the Pope because we see God himself in him, who loves us so much,” he said.

Originally published at Catholic News Agency on 10 July 2013.  Used by permission, all other rights reserved.