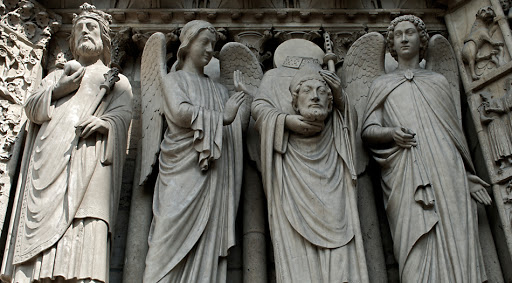 Church is most reliable bearer of knowledge of God

While the search for knowledge is universal, spanning all times and places, true wisdom is found in the Church and points us towards salvation in Christ, said Archbishop Charles J. Chaput of Philadelphia.
“Wisdom is the pursuit of the true, the right, and the lasting,” which find their source “in God, and nowhere else but God,” the archbishop said in a July 8 talk.
“Power, sex, knowledge, money, possessions – none of these things finally lasts,” he explained. “Wisdom consists in turning our hearts to the search for what does satisfy that hunger, and then pursuing it with all our strength.”
Archbishop Chaput gave his talk, entitled “Wisdom, Christian Life and the Year of Faith,” at the Basilica of the National Shrine of the Immaculate Conception in Washington, D.C.
He explained that wisdom is integrally linked with knowledge of God, and the Church is the most reliable bearer of this knowledge. As the Church becomes minimized in society, he said, so also does wisdom, and society turns in upon the self, technology and tools for its nourishment.
“The more secular we become, the less we care about the true, the right and the lasting. And here’s the reason: We don’t really believe they exist. Or we simply don’t care,” the archbishop said.
Instead, society has turned to “see and judge everything in terms of its utility, right here and right now. What’s useful and productive is judged good. What isn’t is judged bad.”
Therefore, Archbishop Chaput continued, “we’re shifting a belief in ourselves to a belief in our tools under the cover of a scientific and technological revolution.”
He warned that “without God, we turn ourselves into the objects and the victims of our own knowledge,” and this objectification of humanity poses a threat because “our tools have more destructive power than at any time in history.”
“Americans love science for the technology we can extract from it, and technology does not have a conscience,” he explained, observing that knowledge has been used to garner power in order “to penetrate, dominate, and exploit the natural world.”
The archbishop cautioned that “(t)he more we subordinate the sanctity of the human person to the tools we create, the less human we become.”
“Our job as Christians is to remind our culture that true and right and lasting things do exist about human nature – and if we abandon these things, we abandon who we are, and we abandon those who need us to speak on their behalf.”
Christians must not be afraid to speak out about the truths that their faith teaches, Archbishop Chaput said, explaining that as the “most reliable bearer of wisdom in the contemporary world,” the Catholic Church is also “the most reliable defender of the human person.”
“Her wisdom lies in seeing the world as God sees it,” he added, saying that the Church reminds humanity of essential truths about the human person.
The Church knows and teaches that human nature does not change, he explained.
“Man is a creature of animated carbon, but every life also has a higher purpose,” even amidst its imperfections and shortcomings, he stated. “We’re put in the world to seek the truth. We thirst for it. We can’t be happy without it.”
He noted that modern American discourse has lost both a respect for wisdom and the humility necessary to appreciate man’s relationship with the truth, leading to troubling cultural trends for the Church and those who still seek to live according to its wisdom.
“It took less than thirty years for abortion to go from a crime against humanity at Nuremberg to a constitutional right,” he observed, adding that it has “taken even less time for disordered sexuality” to be enshrined in law “and to redirect the course of our culture.”
“People unwise enough to accept a slogan like ‘marriage equality’ without challenging its honesty and examining its massive implications, are people capable of doing things even more foolish. And even more damaging.”
“If we think we have some kind of safe haven from these events in America’s tradition of religious freedom, we should probably think again,” Archbishop Chaput warned, pointing to the “coercive” language surrounding the HHS mandate and its requirement that many employers violate their deeply-held religious beliefs by providing insurance coverage of contraception and similar products.
“It’s a monument to ideological pride and belligerence,” the archbishop said of these cultural shifts.
These circumstances challenge modern Christians, who must reject the world’s understanding and choose instead to “live our faith with courage and zeal, endurance and hope, and to begin every new day by grounding our hearts and our actions in the wisdom of the Church,” he stressed.
He warned, however, that this choice to submit to the Church’s wisdom over the world’s ideologies comes at the price of one’s own life for thousands of Christians each year.
“Life consists in choosing one or the other. It’s a choice we can’t avoid,” the archbishop confirmed, “and each of us faces that choice right here, today, now.”
“The wisdom which the Church offers the world is for the humble, not the proud, and it’s the only wisdom that counts: the path to salvation.”
“The true, the right, and the lasting meet in a Man,” Archbishop Chaput reminded listeners. “Our task is to follow him, no matter what the cost, and to lead others to do the same.”
In doing so, the witness of our lives is critical, he said. “Nothing is more compelling than a good man, or a good woman, in an evil time.”

Originally published at Catholic News Agency on 9 July 2013.  Used by permission, all other rights reserved.