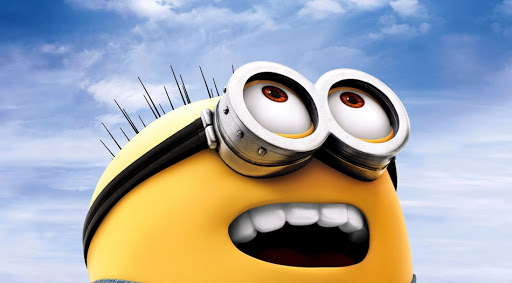 A timely message concerning the importance of family, wrapped up in a lighthearted kiddie flick

Did I really just see what I thought I saw? With only a few weeks having passed since the Supreme Court’s ruling in favor of same-sex marriage, did I really just sit through a feature-length film in which a little girl’s fondest dream (or at least her fondest dream after getting a stuffed unicorn and having a fairy princess appear at her birthday party) was to have both a mommy AND a daddy? And was this movie really released by a major Hollywood movie studio rather than some independent film group funded by Baptists down in the Bible Belt? The answers are yes, yes, and yes. So, what’s the name of this reactionary, culturally insensitive, “on the wrong side of history” piece of propaganda, you ask? Would you believe… Despicable Me 2? “But wait a minute,” you protest, “isn’t that the sequel to that animated kid’s movie, the really popular one about the silly super villain and all his goofy little Tic-Tac shaped yellow minions? How can that be? After all, Despicable Me was mostly slapstick and fart jokes with a little bit of sentimentality thrown in. Certainly its sequel is just more of the same, right?”

Well, sort of. As Despicable Me 2 begins, we find that retired super villain Felonious Gru (Steve Carell) has settled quite nicely into his new role as adoptive father to young Margo, Edith, and Agnes. Gru now spends most of his time attending to the needs of the girls while also trying to start up a new business enterprise selling jellies and jams concocted by his former cohort in crime, Dr. Nefario (Russell Brand). Gru’s newfound domestic tranquility is short-lived, however, as he is soon recruited (tasered, manhandled, and kidnapped, to be accurate) by the worldwide law enforcement agency known as the Anti-Villain League to help track down a new super villain who threatens the safety of the entire world.

Teamed with overenthusiastic AVL agent Lucy Wilde (Kristen Wiig), Gru goes undercover at the local mall in order to determine which of its storeowners is actually the would-be world conqueror in disguise. Though all signs point to Floyd (Ken Jeong), a suspicious seller of toupées, Gru himself believes the culprit to be Eduardo (Benjamin Bratt), the proprietor of the Salsa Salsa restaurant who bears a striking resemblance to El Macho, a master villain long believed dead. While Gru’s attention is on trying to prove his theory, things begin to take a turn for the worse at home. Missing the excitement of his criminal heydays, Dr. Nefario decides to leave Gru’s employment and seek more odious opportunities elsewhere. Worse yet, after Nefario departs, a mysterious figure begins to kidnap Gru’s minions for sinister purposes of his own.

So on the surface, it does indeed sound like business as usual for Gru and company. There’s more than enough minion action as the nattering nincompoops play dress up between bouts of getting mangled, mashed, and mauled by Nefario’s mechanical jelly makers. There’s also plenty of pratfalls as Gru and Lucy attempt a break-in at Eduardo’s restaurant and run afoul of an angry fowl. And of course, the movie delivers its required quota of flatulence as Nefario’s infamous fart guns make more than one reappearance. Everything audiences enjoyed about the first Despicable Me is back for the sequel, and then some.

But all that stuff is just window dressing for the film’s real plot. Right from the get-go, the real focus of the movie is centered around the fact that most of the people in Gru’s life would like to put an end to his status as a single father. Gru’s matchmaking neighbor, Jillian, (Nasim Pedrad) constantly harasses him to concede to a blind date with one of her many cringe-worthy friends, which he finally does so to disastrous results. On top of that, Gru’s youngest adoptive daughter, Agnes, has been given a part in her school’s Mother’s Day pageant, something which makes her very sad because she doesn’t actually have a mother of her own. Gru tries to reassure Agnes that it’s perfectly natural to have only one parent, but the girl is resolute that she should have a mother. Soon, her two sisters join in the effort to try and get Gru hitched. What the girls don’t realize, however, is that Gru is basically terrified of women after a miserably failed attempt to woo a girl when he was a young lad. Apparently, it’s kind of hard to be a chick magnet when your nose is bigger than your feet. So after that humiliation, Gru has had no interest in dating ever again in his life (but that doesn’t stop the girls from trying).

Now if this were any other time besides the year 2013, I wouldn’t think twice about such a contrived plot device. After all, kids trying to hook their single parents up with a new spouse has been a movie staple for decades. Heck, The Parent Trap alone got three sequels (bet you forgot them… everybody else did) and a remake, so it’s not like Despicable Me 2 is breaking any new ground here. But there’s something about the timing of its release, so close on the heels of the Supreme Court decision, that makes Despicable Me 2’s inclusion of children who desire one parent of each sex stand out more than it normally would.

For Christians, especially those who still follow the Church’s teachings, the idea isn’t that shocking. As the recently released catechism for teenagers, YouCat, recognizes, “Every child is descended from one father and one mother and longs for the warmth and safety of a family so that he may grow up secure and happy.” That’s one of the reasons why the family is irreplaceable. “The family is the basic cell of human society. The values and principles that are lived out in the small circle of the family are what make solidarity in the life of larger society possible in the first place.”

In any other era, such thoughts wouldn’t be considered unusual, but in today’s politicized public square, others might well see them as anachronistic and out-of-step with the times. As always, the Church finds itself promoting a counter-cultural message, favoring truth over the flavor of the day. The odd thing is to find such considerations mirrored in a movie aimed at the general populace. Pratfalls and fart jokes are commonplace on the big screen, but the notion that a child might actually want a mommy and a daddy is a pretty rare find these days. So come for the funny (and the flatulence, if you must) and stay for the faith. Despicable Me 2 pleasantly has plenty of both.

P.S.: I have to wonder if, upon viewing their final product, the filmmakers realized just what sort of message they were sending and tried to soften it, because at the very end of the movie, out of nowhere and completely out of place, the minions break into a musical rendition of the most gay-friendly song you can possibly imagine. It's hilarious, though, especially the costumes, so feel free to stick around and clap along. My audience did.