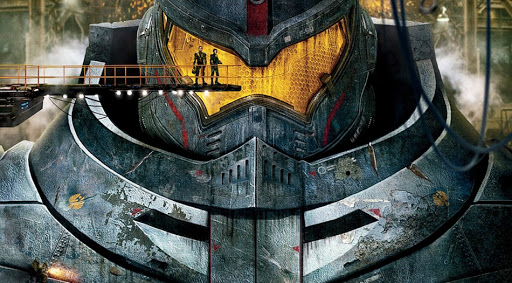 It would be really easy to eviscerate Pacific Rim for its simplistic plot and one-dimensional characters, because it has both of those in spades. But there are a couple of things holding me back from doing so: one is that I'm pretty sure director Guillermo del Toro made the movie that way on purpose, which I’ll discuss more in a minute. The other is that Pacific Rim includes a scene in which a colossal robot strides up to an equally gargantuan monster and, using body language suggesting she's had quite enough of the creature’s city-stomping shenanigans, proceeds to smash the beast over the head with an ocean liner. It would take a harder heart than mine to be too over-critical of a movie with a scene like that in it.

If such moments are your main reason for wanting to see Pacific Rim, then the movie isn’t going to let you down. The mayhem starts off right away with an extended prologue detailing how giant monsters – or Kaiju, as they came to be called – began to enter our world through an inter-dimensional rift in the ocean floor, bringing death and destruction in their wake. As the Kaiju incursions increased in frequency, humanity realized it needed more effective weapons to combat the menace, and so began construction of giant robots dubbed Jaegers. In order for these machines to function properly, however, it was required that a human mind be linked to the robot’s processor. Unfortunately, the initial tests demonstrated that the connection was too powerful and deadly for a single person, so it became necessary to create a system in which two people could join minds and share the burden of operating a Jaeger. The new process proved a success and the tide finally began to turn in favor of the humans. But as if in response, the Kaiju themselves suddenly began to become noticeably stronger and smarter, making them more than a match for many a robot. It was on one such disastrous encounter that ace Jaeger pilot Raleigh Becket witnessed his brother and co-pilot Yancy die at the claws of a Kaiju as their robot, Gipsy Danger, was being ripped apart. After the Beckets’ fateful mission, the world’s governing authorities decided to shut down the Jaeger program and concentrate instead on building monster-sized walls around the battered coastlands.

But take note: all of that is in the prologue alone. The first 10 to 15 minutes are full of snippets of monsters leveling cities and robots leveling monsters – stuff that could easily serve as the main action set piece in most other movies. It’s only after the title card finally appears that the movie slows down a bit and begins to introduce its characters. We find that Raleigh has abandoned life as a pilot to become an itinerant construction worker (much like Clark in the recent Man of Steel… must be a trend), helping build walls to keep out the Kaiju. This proves futile, however, as the first monster to actually reach a wall smashes through it almost immediately. As Raleigh watches the news footage of the destruction, his former commander, Stacker Pentecost, arrives to draft him back into what remains of the Jaeger fleet. It seems Stacker has developed a plan he hopes will result in the destruction of the portal through which the monsters have been coming, but needs what few surviving Jaeger pilots there are to help pull it off.

Returning to Shatterdome, Stacker’s base of operations in Hong Kong, Raleigh is introduced to Mako Mori, Stacker’s plucky perfectionist of a stepdaughter who hopes to become Raleigh’s new co-pilot. He also meets the rest of the pilots in the ragtag Jaeger fleet. Grizzled veteran Herc Hansen and his arrogant son Chuck steer Striker Eureka, the fastest Jaeger ever built; Sasha and Aleksis Kaidonovsky, looking very much like Rocky IV-style Russians, helm the heavily armored Cherno Alpha; and the Chinese triplets, the Wei brothers, command Crimson Typhoon, the only Jaeger with a unique, three-arm fighting style. Aiding the pilots in their mission are Dr. Newton Geiszler, a hyperactive “Kaiju groupie” with an expertise in monster anatomy, and Dr. Hermann Gottlieb, a mathematician of indeterminable accent. Now if these quick character descriptions don’t clue you in as to the vibe director Guillermo del Toro is going for, I don't know what will. Everything there is to know about these folks could (and probably will) fit on the back of their action figure package. These are not real people – they're Saturday morning cartoon characters.

If Pacific Rim is anything, it is del Toro’s homage to everything he loved watching as a kid, primarily stuff like badly dubbed Godzilla movies and anime such as Robotech, but with some nods to old westerns thrown in for good measure (Stacker is a Marshall, the pilots are called Rangers). To properly appreciate the mindset that Pacific Rim is coming from, it’s best to approach it like a glorified episode of one of those old live-action kids shows they used to import from Japan in the early 1970s. Just as in Pacific Rim, characters in those series were simplistic, one-dimensional, and cartoonish, but honestly, how many of us tuned into Ultraman or Space Giants looking for character development anyway? I know that when I flipped the dial to such shows, it was simply to see the heroes act heroically and the monsters act monstrous, and if a little melodrama got thrown into the mix, that was fine as long as it didn't take away too much screen time from all the monster bashing.

Such an approach to characterization will probably prove frustrating to those more mentally attuned to recent fare such as Man Of Steel or The Lone Ranger. Unlike in those films, Guillermo del Toro doesn’t try to deconstruct his source material or reinterpret it for modern audiences. When the characters in Pacific Rim speak in old clichés, they do so sincerely, without an ounce of cynicism or a sly wink to the audience. When Mako states that following orders is about respect, not obedience (guess she read the book of Genesis, huh?), or Raleigh chivalrously demands Chuck apologize for insulting a woman, it’s meant to be taken at face value, not as a joke. The movie’s only nods to modernity are a few too many profanities and all the realistic destruction CGI can afford. Otherwise, del Toro has crafted a perfectly acceptable kids TV show circa 1975 (though a $180 million TV show, to be sure).

As a Christian who is constantly confronted by criticisms in the media that my beliefs are outdated and trite, it will be interesting to watch how audiences respond to Pacific Rim’s old-school presentation. Will today’s moviegoers reject heroes who aren’t gritty or “realistic,” or will they accept Pacific Rim’s “old fashioned” style? I hope it’s the latter, because there are things touched upon in Pacific Rim that it would be nice to see developed further in a sequel, particularly the glimpses we see of how the civilian world has adapted to constant giant monster attacks. But if it turns out to be the former, that’s fine too, because at least I still got the chance to see a movie where a giant robot smashes a monster in the face with an ocean liner. For my tastes, it’s a win-win either way.