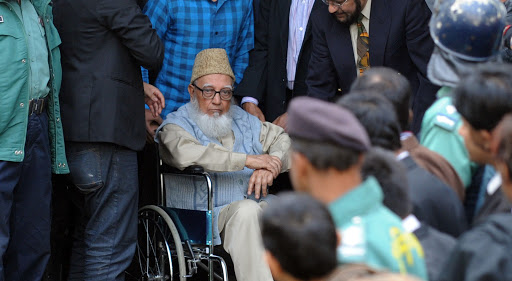 A Bangladeshi war crimes court has sentenced the former chief of the radical Islamist Jamaat-e-Islami Party to a 90-year jail term for orchestrating crimes against humanity during the country’s 1971 liberation war.
Ghulam Azam, 91, a spiritual guru of Jamaat, was found guilty of planning, conspiracy, incitement, complicity and murder on more than 60 counts of crimes against humanity.
“Ghulam Azam deserves the death penalty for the crimes, but considering his old age we convicted him to 90 years in prison,” ATM Fazle Kabir, head judge of International Crimes Tribunal, said during the verdict.
The verdict comes amid tight security in Dhaka following incidents of violence by Jamaat activists in a protest strike called by the party.
Azam was the party’s chief from 1969 to 1971 and strongly opposed Bangladesh independence from Pakistan. During the war he helped form militias as frontline forces of the invading Pakistan army.
Up to three million people were killed and over 200,000 women raped during the conflict.
Azam fled to Pakistan at the end of the war and his Bangladesh citizenship was revoked in 1973. However, political changes meant he was allowed to return in 1978, and served as Jamaat chief from 1991 to 2000.
“Ghulam Azam deserved the death penalty, but justice was not done,” says Shahriar Kabir, acting president of the Committee for Secular Bangladesh and Trial of War Crimes. “He is the mastermind of war crimes, because the collaborator militias he formed were responsible for the widespread murder, torture and rape of innocent men and women.”
Ghulam Azam was also actively involved in anti-Bangladesh and pro-Pakistan propaganda in influential Middle Eastern Muslim countries for years after Bangladeshi independence, he added.
As news of Azam’s verdict spread, hundreds of secular activists, demanding the death penalty for war criminals and a ban on Jamaat, took to the streets in protest against the verdict. “We don’t accept the farcical verdict,” some chanted.
Defense lawyer Tajul Islam says justice was not done to his client. “State prosecutors cited newspaper records of speeches given by Ghulam Azam during war, but couldn’t prove any of the alleged crimes. We will appeal against the verdict.”
Eight more leaders — six from Jamaat and two from BNP – are behind bars and being tried for their alleged war crimes. Jamaat and BNP have said the tribunal is politically motivated.
Despite its popularity among the majority of Bangladeshis, the tribunal has seen controversy over procedures and government influence. The New York-based Human Rights Watch has said it falls short of international standards.

Originally published at UCAnews on 15 July 2013.  Used by permission, all other rights reserved.