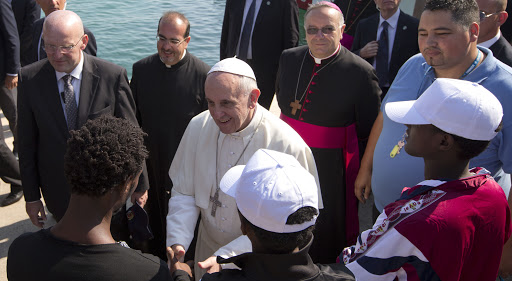 Archbishop describes the impromptu papal visit as one of “mercy”

After the unexpected July 8 visit from Pope Francis, the little Italian island of Lampedusa received “an electric shock,” because he shed light on “the problem of immigration and the suffering of immigration,” says Archbishop Francesco Montenegro of the Agrigento, Sicily archdiocese.
It is “meaningful that Pope Francis made his first trip to Lampedusa, thus putting into practice what he asked: to go to the end of the world, to the peripheries and the poor,” observed Archbishop Montenegro, whose archdiocese includes Italy’s southernmost territory.
Part of the Italian region of Sicily, Lampedusa is in fact closer to Africa than it is to Italy.
And immigration has always been a concern for the little island, which is inhabited by about 5,000 people.
Archbishop Montenegro explained in a July 15 interview with CNA that the people of Lampedusa remember the first immigrants knocking on their doors in the 50s. Back then, “it could be a Tunisian that crossed the sea in search of luck.”
And even though the fear of a possible exodus from Africa dates began in the 50s, it was only at the end of the 80s that migration flows from Africa to Lampedusa started increasing each year.
In fact, since 1988, almost 20,000 people have died in the stretch of sea between Africa and Lampedusa.
“That stretch of sea is a tomb,” Archbishop Montenegro told Pope Francis during a lunch at the end of May.
The idea to pay a visit to Lampedusa first came to Pope Francis in April.
Archbishop Montenegro recounts that, “Don Stefano Nastasi, the parish priest of Lampedusa, wrote a letter to the Pope, explaining the situation of the island and inviting him, a son of migrants, to go and visit Lamepdusa.”
The letter was delivered and highlighted by Migrantes, a foundation of the Italian Bishops’ conference that deals with the issue of migration, which is also led by Archbishop Montenegro.
The issue also came up when the bishops of Sicily made their ad limina visit to Pope Francis and the tomb of St. Peter in May. During the visit the Agrigento archbishop raised the problem of immigration across the Mediterranean Sea.
Archbishop Montenegro told CNA that Pope Francis reacted to his words by saying, “I must make a second trip to Italy this year.”
“I thought,” he explained, “that the Pope just thought of planning a trip for the following year.”
In fact, the visit appeared to come together rather quickly, since the archbishop found out about where the Holy Father would visit “just a week before he came.”
After the visit, Archbishop Montenegro asked the pontiff if he was happy about it, and the Pope answered “yes.”
He was “very focused on his goal, that was to make a visit for mercy and the memory of the deaths,” the archbishop said.
When it comes to the political realm, Archbishop Montenegro stated that finding governmental solutions is the responsibility of politicians, not churchmen.
At the same time, he did offer an analogy of how the tiny Italian island can provide a starting point for addressing the global problem of immigration.
“If the world is a house, Lampedusa is one of its doors. Through Lampedusa, we can get into the world. Then, States must be able to accompany people to visit the rooms of the house.”
Lampedusa is a door because “it is a natural landing for those who come from Africa. It is just a platform. People just pass through Lampedusa, in search of other place where to land and stay,” he said.