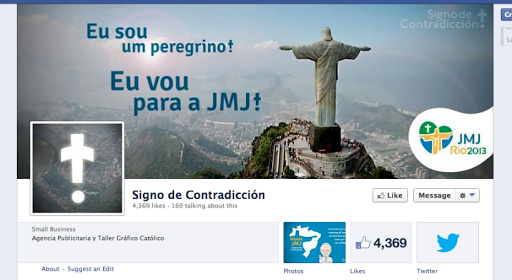 “Hello, I am a young Catholic and I will be traveling to Brazil for a day with Pope Francis. I want to pray for you. What would you like me to pray for?” This is how several young people in different South American countries have approached passersby or have gone from house to house to offer their intentions to pray during World Youth Day.

On June 12, during his catechesis, the Holy Father encouraged all Christians to make sure that “the Church [be] a place of God’s mercy and hope where everyone can feel welcomed, loved, forgiven, and encouraged to live according to the good life of the Gospel. And for people to feel received, loved, forgiven, and encouraged, the Church must open the doors so that all can come in, and we must go out of those doors and proclaim the Gospel.”

This message has been taken and translated in posters by “Sign of Contradiction” [Signo de Contradicción], a Catholic advertising company and graphics workshop that has been working with the pilgrims of the Christian Life Movement in several Peruvian cities to promote some World Youth Day initiatives.

“Sign of Contradiction” began as a group of young people with a commitment to their faith and who thought of offering some visual tools to meet the different needs of parishes and ecclesial movements in the city of Lima. One of its initiators, who chose to remain anonymous, said that they are looking to “preach the Gospel using advertising and graphic concepts.”

Last month, its fan page came out with this invitation:  GATHERING OF INTENTIONS. This Saturday, June 15, WE ARE ALL PILGRIMS! We will take WYD to the streets in the first “Gathering of Intentions.”

The purpose of this campaign, along with other ones, is to act on Pope Francis’s invitation to go out to the peripheries to catechize. The idea is to collect intentions in Lima and take them to Rio de Janeiro. Each young pilgrim commits to pray during the days of pilgrimage for those people who have entrusted him or her with their concerns, or with some suffering or some need.

María Belén Sarmiento Ricci, an 18-year-old member of the Christian Life Movement in Lima, tells us: “My experience of going out into the streets as a pilgrim collecting intentions was very rewarding. It seems like an apostolic idea that opens doors. You can really see how people are surprised to see that you, a stranger, want to pray for their intentions.”  She also shares the words of the Pope, who trusts fully in the apostolic power of Christian joy, truly bear fruits. “The joy that the Lord gives us is contagious,”  María Belén concludes.

For her part, Grecia Pizzarro comments: “People generally welcomed us with a lot of enthusiasm and gratitude. We met with a gentleman who asked us to pray for his brother who is 21 years old and has a very aggressive cancer. He really entrusted himself to our prayers. Others asked us if they had to give us something in exchange and were surprised when we said that we didn’t need anything, that it was a free service.”

In Medellín, Colombia, several young people are preparing for WYD. Last Friday, June 14, a group of missionaries went out on the streets to “give out” recitations of the Hail Mary. They addressed the people and invited them to join them in the classic Marian prayer for their intentions. At first, the people were a little surprised and did not understand the reason why these young people approached them to pray for them. Lucía Rendón shares that at the end of each prayer, people had grateful hearts: “When you had just finished praying the Hail Mary with the person, something very beautiful happened: it created a grateful attitude upon seeing that someone selflessly prayed for them and that it was all they wanted: just to pray for you. That is how God is with us, and this was an opportunity to bring people to him through Mary.”

The fruits of this intention gathering begin to spread. Some parishes in Lima are promoting the Intentions Collection among their parishioners, and the Hail Mary “giveaway” has already been done in other cities across Peru and Colombia.

Many joyful youth who are convinced of their faith are making real efforts to live out the Holy Father’s insistent message to go out to the peripheries. A few days ago, he referred to the Church’s need to go out in search of those 99 sheep that we are missing and not just to be watching the one we have. And he invited us once again: “We have to go there. That’s why I like to use the phrase ‘go to the peripheries’ – the existential peripheries. All peripheries: those of real physical poverty and the intellectual poverty that is also real. And there we must sow the seed of the Gospel, by word and by testimony.”

The WYD Mission initiative is intended to build up the identity of pilgrims traveling to Brazil and also those who participate in these events from their countries, united in prayer and following the messages of the Holy Father. The joy of the upcoming meeting has encouraged them to go out to the existential peripheries to encourage others to renew their faith.