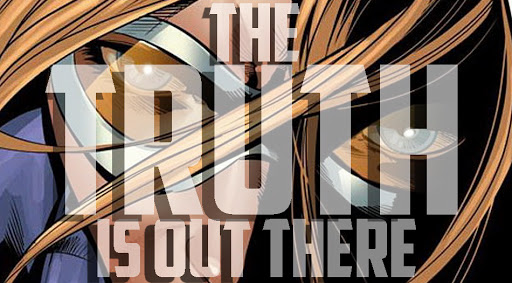 Amadeus, the author’s pen-name, says too many young people don’t know the faith, and he hopes his graphic novel will help remedy that

Building on his lifelong love of comic books, an Eastern Catholic monk has authored a short graphic novel, “The Truth is Out There,” to help explain the truths of the faith in an understandable way.

“The reason I did it in cartoon format was because I didn’t think my friends would read it any other way,” Amadeus – which is the author's pen-name – told CNA in a recent interview.

“The Truth is Out There” tells the story of two space-age mail carriers who begin discussing the meaning of life at a coffee bar, and as they search for truth, one comes to find it resting in the Catholic Church.

In the book's introduction, Amadeus recounts that the work began a few years before he entered the monastery, during a conversation he was having with three friends of his who were all “born and raised Catholic.”

“It became appallingly clear how little any of us knew our faith…I had just stumbled upon the greatest problem of my generation of Catholics,” wrote Amadeus.

The monk told CNA that he “grew up loving to read,” and his favorite comic was “The Adventures of Tintin.” When he was ten, he was given a book “on how to draw comics.”

Amadeus found he “could do the cartoons alright,” and said, “I fell in love with cartooning.”

In high school and college, he wrote cartoons for his school newspapers, but “wanted to make drawings come to life,” and so became an aerospace engineer.

After working as an engineer for a few years, he felt a call to join the Maronite Monks of Adoration, a contemplative order located in Massachusetts.

The order is part of the Maronite Church, an Eastern Catholic Church based in Lebanon. The monks' life is contemplative, dedicated to Eucharistic Adoration and praying the Divine Office and the Divine Liturgy.

“When I came to the monastery, it was actually incredible: that was when I didn't want to cartoon,” Amadeus related. “I thought, 'I really have to settle into being a monk.'”

“But the moment I entered the silence of the cloister, it was like my head was flooded with cartoons. It was nonstop: I just had all these great ideas.”

Amadeus was able, “with a lot of mortification,” to “put off doing this book for a couple of years.”

But in the monastery, immersed in philosophy and theology, he found that he wanted to share the riches of the Truth with the friends he had known before entering his new life.

“Originally, I wanted to write it out as a letter with a few drawings, like the illustrated manuscript traditions,” he related.

But finding that “too boring,” Amadeus said, “finally I broke down and decided to do the whole thing as a comic strip because that’s what I'm good at; that’s what I do best.”

“The Truth is Out There” betrays a familiarity with the pre-Christian tradition of philosophy – Plato and Aristotle – as well as the thought of Saint Thomas Aquinas.

Amadeus said the comic format is “just the way I know how to get my thoughts, my ideas out,” and that “the harder the idea is, the more helpful it is to draw it out.”

Part of his motivation in drawing the graphic novel was to convey the beauty of the Church's faith, and Amadeus said that beauty – whether made by man or God – is meant to draw us to the Creator.

“I don’t think there is a better way to draw hearts to God, to Christ. That’s where all the beautiful churches and artwork, all those things we hold in such high regard…that was inspired by the beauty of nature to return to the beauty of God.”

Bishop Gregory J. Mansour, of the Maronite Eparchy of St. Maron of Brooklyn, has written that “somehow the words 'comic book' and 'intellectually challenging' don’t usually go together, but they do in 'The Truth is Out There' by Amadeus…Thank you, Amadeus, for presenting the journey from the prison walls of our mind to the exhilarating freedom of the truth in such an exciting way.”

Amadeus' book was published by Catholic Answers in May, and is available at Amazon for $9.32.

He intends to write another comic novel, this time about salvation history, called “The Big Picture.”