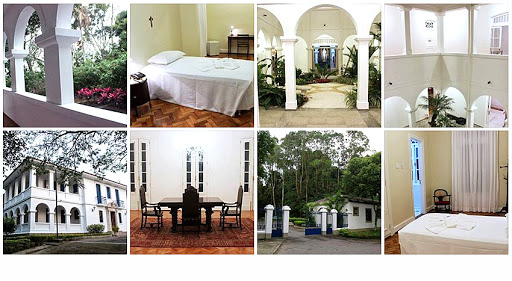 The Holy Father keeps it simple in Rio de Janeiro

The Pontifical Council for Social Communications has posted a series of photos of the room where Pope Francis will stay during his visit to Brazil for World Youth Day, which will take place July 23-28.
The accommodations are located at the Sumare House in Rio de Janeiro, where Blessed John Paul II also stayed in October, 1997. The late pontiff had traveled to Brazil for the Second World Meeting of Families.
The room where Pope Francis will stay has a simple bed, a night stand with a telephone, and a small desk. A crucifix hangs on the wall over the bed.
The room reflects the simplicity and humility that has characterized his pontificate and his prior ministry as archbishop of Buenos Aires.
While archbishop, Cardinal Bergoglio lived in a small apartment in Buenos Aires rather than the archbishop’s residence. He rode the bus and the metro and cooked his own food.
Even as Bishop of Rome, he has elected not to live in the papal apartments, but rather in the Casa Sancta Marta, the Vatican's guesthouse.
The Pontifical Council for Social Communications photos of Pope Francis' room in Rio de Janeiro can be seen here.