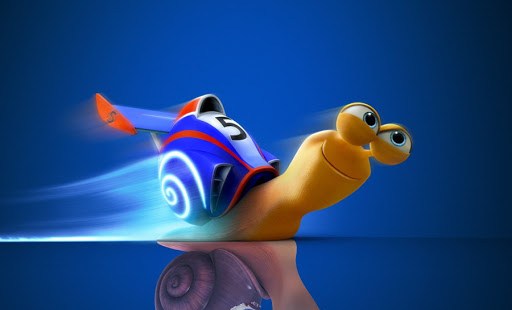 An all-star voice cast, spectacular visuals – but a lousy script. The kids will probably still enjoy it, but mom and dad should lower their expectations.

Remember back in the waning days of 2009 when James Cameron’s Avatar presented an alien world so beguiling that some viewers actually entered a deep depression over the thought that none of it was real? One should never doubt the power of movies to take us places we’ve only ever imagined. Animated features, by the fact that they have no limitations other than the imaginations of their creators, are particularly suited to this task. This year alone, animators have treated moviegoers to trips to danger-filled prehistoric times (The Croods), a forest kingdom full of wasp-sized warriors (Epic), and even an alternate dimension where colorful creatures go to college in hopes of getting a good job after they graduate (Monsters University). And now, via DreamWorks Animation’s new family feature – Turbo – audiences can be transported to a fabled place few, if any, cartoon movies have ever taken us before: urban Los Angeles.

But that’s not where the story begins. Turbo opens in a suburban neighborhood so comfortably familiar that it could easily be just around the corner from where Andy spent his days playing with Woody and Buzz. It’s here that we first meet Turbo, who along with his older brother Chet and a few hundred other snails, lives in a small tomato garden outside a typical tract home. Day after day, all of the snails forlornly creep forth to forage, sighing in stoic acceptance each time a crow swoops down to carry off one of their number. All of them except Turbo, that is, who has dreams of going fast – fast enough to outrun crows, fast enough to avoid the bug-crunching tires on a little boy’s Big Wheel, fast enough even to compete in races like the Indy car drivers he obsessively watches on television. His brother Chet, content with the status quo, constantly harangues him to abandon his hopeless dreams and get with the snail program. Nevertheless, Turbo remains undaunted.

One evening, while sitting atop a freeway overpass watching the traffic speed by, Turbo accidentally gets sucked into the nitrous oxide system of a tricked-out street racing car and mysteriously gains the power of super-speed. (Yeah, I know it doesn’t make any sense, but neither does developing super powers after getting bitten by a radioactive spider, so just try to roll with it.) Speeding back to inform his brother Chet about this amazing turn of events, Turbo arrives just in time to see Chet being carried off by a crow. Racing to his brother’s rescue, Turbo follows the bird across the city, finally managing to use his newfound abilities to get the crow to release Chet. But once the two brothers recover from their ordeal, they realize they’re a long way from home.

The misplaced mollusks find themselves in a run-down strip mall in Van Nuys, a neighborhood desperately in need of some urban renewal. As fate would have it, the shopping center is populated by a group of proprietors who in their down time (of which there's a lot) like to engage in snail races. One of these shop owners is Tito, a proprietor of Dos Bros. Tacos. Like Turbo, Tito is something of a dreamer, always concocting plans to propel his family business into the spotlight. Tito’s older brother Angelo, however, has grown tired of Tito’s endlessly failing schemes, and constantly harangues Tito to abandon his hopeless dreams and get with the taco program. (If you're not beginning to see the parallels between Turbo and Tito yet, don’t worry; the movie eventually beats you over the head with them.)

Spotting Turbo and Chet on the curbside, Tito picks up the pair in hopes they will help change his loosing streak at the snail races. Placed on the racing table to await the next competition, Turbo and Chet meet their fellow racers, a garish group of gastropods with names like Whiplash, Burn, and Smooth Move. At first, the city snails brutally make fun of their garden grown counterparts, but once Turbo literally blows away the competition, they come to accept the brothers as part of the team. Amazed at Turbo's speed, Tito begins to come up with ideas on how to use his discovery to help promote business for the strip mall, and for the first time ever his actions actually reap positive benefits. Turbo has bigger plans, though, and with a little ingenuity, manages to plant the idea in Tito’s head that they should enroll Turbo in the Indianapolis 500. All they need is for the other cash-strapped shopkeepers to willingly cough up the $20,000 entry fee and place all their hopes on a snail beating the fastest cars in the country to the finish line.

Turbo is something of a mixed bag. Thanks to Monsters University's recent foray into formula bending (wherein it made the relatively bold statement for a kids’ movie that while everyone is special, not everyone is meant to be a rock star) Turbo’s immediate return to the tried and true platitude of “you can achieve anything you dream as long as you never give up” feels a little stale in comparison. If you’re going to borrow from Pixar (the kid on the big wheel is basically a younger version of Sid from Toy Story), then you might want to take notice of how they strive for originality in their themes. More bothersome, however, is the fact that despite having the bulk of the movie’s big names supplying their voices (Ryan Reynolds, Samuel L. Jackson, Maya Rudolph, Paul Giamatti, Snoop Dogg/Lion/Whatever), the snail characters just aren’t that interesting. Having the notoriously profane Jackson deliver a line like, “Son of a… gun!” is funny, but it takes more than a one-off pop culture reference to make a memorable character. Like too many recent animated movies, Turbo makes the mistake of hiring a bunch of talent, but then giving them little in the way of a script to work with.

On the plus side, the human characters are a pretty well developed bunch. Tito in particular comes off much more likable than the titular star of the film himself. Whereas Turbo’s dream of becoming a racing star often drives him to indulge in reckless and selfish behavior, Tito’s hapless attempts at publicity are driven more often than not by an urge to see his brother and the other shop owners become successful. Or to put it another way, Turbo wants to fulfill his dreams despite his brother, while Tito wants to accomplish his goals to help his brother. Tito, it appears, has something of a grasp on the Church’s teaching regarding solidarity – the sharing of spiritual and material goods for the betterment of all. (This is not a surprise given his exclamations of “Santa Maria!”) Turbo, on the other hand, just seems to grasp the philosophy of every man – or snail, as the case may be – for himself.

It’s the portrayal of Tito and his fellow humans that makes the setting of Turbo so refreshing and unique. Unlike the hordes of gangstas and rapper wannabes populating most major movies set in a urban environment, the racially diverse residents of Tito’s shopping center are just normal, recognizable folks trying to make ends meet in an area of the city that’s seen better days. To someone who has spent his fair share of time stomping around the neighborhoods of Atlanta like I have, this part of the movie felt fully realized. And it’s here that I have to give credit to the real stars of Turbo: the artists and animators. Once the movie moves out of the suburbs, the visuals just reek of hours of research. The settings are so lovingly and meticulously rendered that you can almost feel the mildew in the air at the strip mall and smell the rubber burning on the track at Indianapolis. Visually, Turbo may actually be my favorite animated movie of the year so far.

Of course, none of this stuff, pros or cons, is going to matter to the younger kids in the audience. They’re just going to want to know if the snails say and do funny things (they do) and whether or not the visuals are attention grabbing (they are). So from the standpoint of being a pleasant diversion for the little ones on a hot afternoon, Turbo’s value is worth more than the ticket price. Adults, however, may find themselves afterwards wishing the story had been as sweet to the senses as the eye candy.