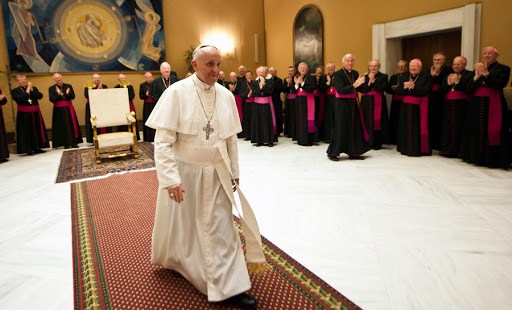 Ahead of Day for Life Sunday in the U.K., Pope Francis has sent a message to British and Irish Catholics encouraging them to promote the profound value of all human life in their societies.
“Calling to mind the teaching of Saint Irenaeus that the glory of God is seen in a living human being, the Holy Father encourages all of you to let the light of that glory shine so brightly that everyone may come to recognize the inestimable value of all human life,” he said in his July 17 message.
“Even the weakest and most vulnerable, the sick, the old, the unborn and the poor, are masterpieces of God’s creation, made in his own image, destined to live for ever, and deserving of the utmost reverence and respect.”
The message from the Bishop of Rome is sent days before the Day for Life will be celebrated in England, Wales and Scotland on July 28. Ireland observes the special Sunday on Oct. 6.
The timing of the message comes as Ireland advances towards liberalizing access to abortion.
On July 12 the Dáil, Ireland’s lower house of parliament, approved a bill allowing abortions which would save a woman’s life, including when the mother threatens to commit suicide. The bill still needs the approval of the upper legislative body, the Seanad.
In this message, Pope Francis underscored the need to care for life from conception to natural end.
“His Holiness prays that the Day for Life will help to ensure that human life always receives the protection that is its due, so that ‘everything that breathes may praise the Lord.’”
Observing Day for Life Sunday, parishes in England and Wales collect proceeds during the day to support the work of the Anscombe Bioethics Centre and other life related activities supported by the Church.
The day’s theme this year will be “Care for life: It’s worth it,” taken from a homily preached by Pope Francis when he was the cardinal archbishop of Buenos Aires at a 2005 Mass in honor of Saint Raymond Nonnatus, the patron of pregnant mothers.
“All of us must care for life, cherish life, with tenderness, warmth,” he had preached.
“To give life is to open our heart, and to care for life is to give oneself in tenderness and warmth for others, to have concern in my heart for others.”
During the Mass he emphasized that “caring for life from the beginning to the end” is “a simple and beautiful thing. Go forth and don’t be discouraged … care for life, it’s worth it.”
Ireland’s move towards legalizing some abortions follows the death of an Indian woman who was refused an abortion who died of blood poisoning because doctors failed to detect an E. coli infection.
Though the ruling Fine Gael party had promised in its campaign for the 2011 elections not to introduce abortion legislation, the party has now expelled members who voted against the bill.
Lucinda Creighton, junior minister of state for European affairs, was expelled after saying parts of the bill are based on “flawed logic and absolutely zero medical evidence.”
Four other Fine Gael members have been expelled for their opposition to the bill, as well as Sinn Féin member Peader Toibín.
Pro-life supporters maintain that the suicide threat exemption will effectively allow abortion on demand.
The bill does not allow for the abortion of fetuses who are able to survive outside their mother’s womb.

Originally published at
Catholic News Agency on July 17 2013  Used by permission, all other rights reserved.