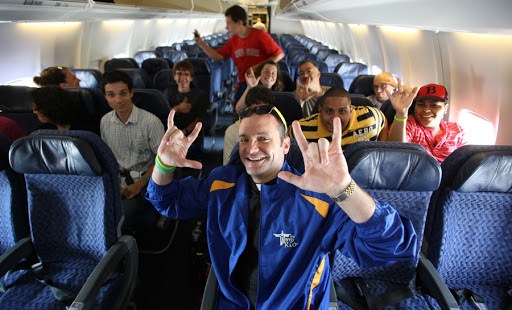 The week before World Youth Day events begin is called ‘Mission Week’, and Father Andrew O’Connor’s teens have used the time to do door-to-door evangelism in Rio

Father Andrew O’Connor is perhaps almost as well known in New York’s fashion scene as in the Bronx parish he pastors. Taking a retreat in Guatemala years ago, he was impacted by the grinding poverty and hopelessness he saw. He found a way to get New Yorkers to share their wealth with Mayan Indians in the Central American country by creating Goods of Conscience.

The idea is simple: a workshop based at the church employs working-class Bronxites to produce garments from fabric woven in Guatemala. Purchasing the weaves from Mayans give them a much-needed living wage.

This week, Father O’Connor is focusing his attention on another area of Latin America, and perhaps helping to form the consciences of those who are with him. The pastor is leading a group of seven young people (along with several adults) from Holy Family parish in the Bronx to World Youth Day.

If it needs to be said again, the group is saying it with their actions: World Youth Day is not a “Catholic Woodstock,” in spite of what secular newspapers often say. Sure, there’s fun, there’s music, there’s dancing, there’s socializing. But the Holy Family pilgrims, like the several hundred thousand others who are coming to Rio de Janeiro from all over the world, are attending the weeklong event for spiritual edification.

Many are already gathering in the Brazilian metropolis ahead of next week’s events. The New York pilgrims aren’t just hanging out, waiting for things to happen – they’re working.

Officially, according to the WYD website, this has been mission week, and the Holy Family crew has found a mission.

“We are visiting homes in the parish of St. Andrew in Doradous, evangelizing.  It has been very fruitful,” Father O’Connor said Friday evening. “A young man in one of the homes had attempted suicide and was despondent.” Perhaps the visit from the Americans came at a providential time for him.

One of the young pilgrims is Kiara Morales, who works with the parish youth back home. “It’s been super busy,” she said this week. For five hours a day, the Bronx youth teamed up with peers from a local parish and knocked on doors, “hoping someone will open and let us in while we share the Gospel and pray. Some are welcoming and others say they are too busy. Some even give us food and coffee. It’s a great feeling. We have come in contact with some people who are not Catholic and yet they don’t close the doors on us, but instead say it is the same God, so let us worship him in our own way.”

That’s been a concern of the Church for some time. Once a solidly Catholic continent, Latin America is becoming much more diversified in its religious makeup. In fact, as Pope Francis is about to undertake his first overseas apostolic journey – providentially to the continent from which he came – a new Pew Research Center analysis finds that the share of Brazil’s overall population that identifies as Catholic has been dropping steadily in recent decades. Over the same period, the percentage of Brazilians who belong to Protestant communities has been rising, as has the share of Brazilians who identify with other religions or with no religion at all.

Those who have left the Church are in the prayers of the young people from the Bronx. “We are praying the Breviary,” said Father O’Connor. “We will have adoration tonight.”

Catholic or not, the families have been mostly hospitable to the young people. “People were very welcoming and gave our young people, with young Brazilian evangelizers, food and great warmth,” Father O’Connor reported.

“Today, a very poor family gave us fresh bread and pure honey and told us to give them our names so that they will keeps us in their prayer,” Morales said. “After a while the language is no longer a barrier.”

She added that the trip did not come easy: “We worked very hard for over a year to get to where we are today,” she said. That means finding the means to go from New York to Rio. Again, Father O’Connor’s ingenuity helped.

“He had a pig roast at his parish to raise funds for travel to Rio, among other events,” reported Cathy Hickey, who is affiliated with the South Bronx Educational Foundation. “He keeps bees on the rectory roof, and his honey won a second place award. He raises hops in the rectory that he sells to the Bronx Brewery.”