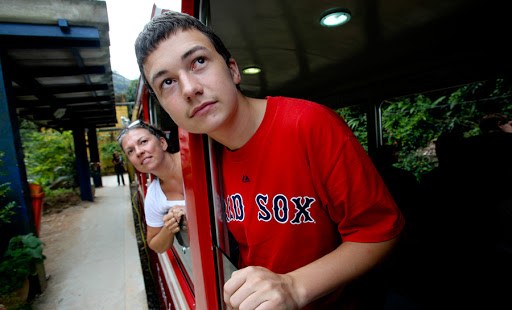 The Church is supposedly irrelevant. Then why do all these young people still care?

As the official start of World Youth Day nears, Archbishop Orani Joao Tempesta of Rio de Janeiro reflected on the event as a sign that young people always look for God in order to serve him.

The festive atmosphere created by thousands of youth coming to Rio de Janeiro from other cities in Brazil and around the world, shows the world that the youth are “animated by Christ, walking with Christ, seeking God, to serve God, to bring the brothers to Life,” the archbishop told CNA.

Archbishop Orani spoke at the Parish of the Resurrection in the Ipanema area of Rio de Janiero on July 21. The Mass began at 5:00 p.m. and was con-celebrated by about 15 priests from the city.

“Young people are excited, happy, to welcome the Holy Father and live with him in these beautiful moments,” the archbishop said of young people's anticipation of Pope Francis' arrival in Rio de Janiero on Monday.

Amid chants, prayers and praises, Archbishop Orani used the Mass to encourage the teens present to participate actively and with joy. He also specifically thanked the Shalom movement and the Charismatic Renewal, and blessed various objects presented to him by pilgrims.

The youth who came to the Parish of the Resurrection did so on foot, singing and praying. As they walked, the pilgrims chanted “Esta es la juventud del Papa!” or “This is the youth of the Pope!” – among other slogans.

World Youth Day will take place in Rio from July 23 – 28, during which Pope Francis will be staying in a modest residency, visiting a slum and traveling without his popemobile.