‘Infect Everyone’ with Joy of Christ, says Rio Archbishop 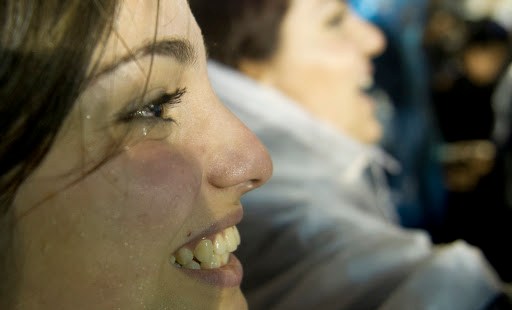 Archbishop Orani Tempesta of Rio de Janeiro greeted pilgrims at World Youth Day's opening Mass, urging them to spread the infectious joy and peace of Jesus Christ to the whole world.
“Walk through this city, witness to Jesus Christ, commit to the new world,” Archbishop Tempesta preached at the July 23 Mass on Rio's Copacabana beach.
“Infect everyone with the joy and the peace of Christ, as sentinels of the morning, working for the renewal of the world in the light of God's plan.”
The head of the Church in World Youth Day's host city welcomed the pilgrims, telling them “this marvelous city became even more beautiful with your presence.”
He noted that the event has not been held in Latin America for 26 years, and that “providentially” Rio de Janeiro is “the place to welcome the first apostolic journey of the first Latin American Pope in history.”
Archbishop Tempesta thanked pilgrims for coming from the world over and said the happiness of “our shared faith and joy of discipleship … invites us to reach out to other youth, making us missionaries in all the nations.”
“The best gift to give others is the presence of Christ, which fills us and drives us to love and to give of ourselves, always in a fraternal dialogue.”
He noted that throughout the city are “many relics” of the 18 patrons of this World Youth Day, “recalling that at all times and places of the world we have youth who are holy.”
The “youthful enthusiasm” displayed around him, Archbishop Tempesta said, shows “the face of the young Christian, who seeks to unite the witness of an authentic Christian life with the social consequences of the Gospel.”
“We are called to be protagonists of a new world,” he said, playfully referring to the New World of the Americas but pointing to the “new world” informed by Christ, a theme to which he returned several times in the homily.
The readings at the Mass expressed Matthew's call to discipleship with the Lord, and the psalm speaking of a desire to do with pleasure the will of the Lord.
“It is this biblical expression that we would wish to be on our lips and in our hearts today and always: Here we are, Lord!”
Like Matthew, Archbishop Tempesta said, we must also “be ready for the consequences of a 'yes' to God, full of challenges and joys.”
The call of Christ, he said, is what brought together the pilgrims from all over the world with Our Lady of Copacabana, “under Christ the Redeemer with his warm embrace.”
“The sea, the sand, the beach and the crowd remind us of the call of the other disciples, along with Matthew.”
“Today,” he preached, Christ “invites us for a swim in deep waters, the waters of our baptism.” He noted that the beautiful gathering is in the “heart” of the Year of Faith, and that we are called “to live a deep faith.”
The people of the Church of Rio de Janeiro, he said, “felt called by God to welcome you” and are responding to the call of Christian hospitality: “the other is Christ for us. The other is our brother.”
“We are called to live by building up a world of brothers. We want each and everyone to feel welcomed into the embrace of Christ, who calls all to join him in building up the Kingdom of God.”
Archbishop Tempesta urged the pilgrims to follow Christ, “in the footsteps of the successor of Peter, the pilgrim Vicar of the Redeemer in this Rio, spreading brotherhood wherever we go.”
“Let us be harbingers of peace and concord, urging the world to live the holiness that flows from the Redeemer of Man.”
The long pilgrimage of Christian life, he said, is a call to live the reality of Christ among-us, and to “transmit it to others in a way both accessible and understandable.”
“You, dear young people, are a gift to a society that hopes that you have the solution to its crisis of values. You're called to form a new generation which lives the faith, and to pass it on for the following generation.”
Archbishop Tempesta encouraged the pilgrims to participate in their communities “with enthusiasm,” making it an opportunity of “coexisting with our brothers and sisters, witnessing that another world is possible.”
“The first pilgrim, who is among us, the Holy Father, Pope Francis, stood with us and indicates the way during these days. Dear young people: be not afraid to open your hearts for Christ.”
In the face of “barriers and obstacles,” he said, “let us build bridges instead … this city needs the witness of solidarity, the sharing and the acceptance of the love of Christ the Redeemer.”
The archbishop invoked the intercession of Mary, under the titles of Our Lady of Aparecida, Peña, and Nazareth for each of the pilgrims to be “missionary disciples of the new evangelization, being protagonists of a new world, as sentinels of the morning awakening to a new dawn of hope: Christ is Risen and goes ahead of us!”
Originally published at Catholic News Agency on 23 July 2013.  Used by permission, all other rights reserved.