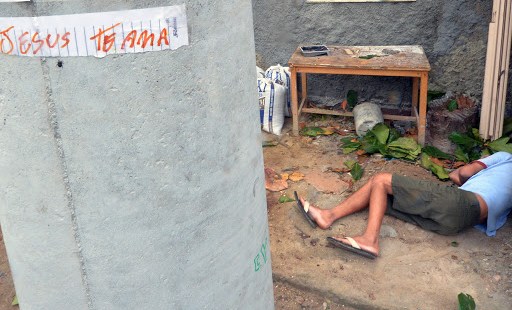 “In every suffering brother and sister that we embrace, we embrace the suffering Body of Christ,” Holy Father says

At a hospital in Rio de Janeiro, Pope Francis said his namesake St. Francis of Assisi put his conversion into action when he embraced a man with leprosy, saying this is a model for the life of a Christian.

“This brother, suffering and an outcast, was the 'mediator of light … for Saint Francis of Assisi,'” Pope Francis said, quoting his recent encyclical, “because in every suffering brother and sister that we embrace, we embrace the suffering Body of Christ.”

“Today, in this place where people struggle with drug addiction, I wish to embrace each and every one of you, who are the flesh of Christ, and to ask God to renew your journey, and also mine, with purpose and steadfast hope,” he said during his July 24 visit to St. Francis of Assisi Hospital, a center which treats drug and alcohol addiction and is free of charge to indigents.

Earlier, Pope Francis had said Mass at the shrine of Our Lady of Aparecida and visited a seminary. On returning to Rio de Janeiro and coming to the hospital, he was greeted by the city's bishop, Archbishop Orani Tempesta, and by the hospital's coordinator of projects and its director.

Two of the facility's patients gave their testimony, and gave gifts to Pope Francis before he spoke.

At this “particular shrine of human suffering,” he said “we all have to learn to embrace the one in need” as did St. Francis, who saw that “true joy and riches” are found not in the possession of material things but “only in following Christ and serving others.”

Pope Francis addressed the effort in “various parts” of Latin America to de-criminalize and “liberalize” drug use, saying this “will not” achieve a “reduction in the spread and influence of drug addiction,” as is sometimes argued.

The Pope lamented that selfishness often prevails in society, rather than the “attention, care and love” required to fight chemical dependency. Societies need to be courageous, he taught, in acting against drug-trafficking and its attendant violence.

“It is necessary to confront the problems underlying the use of these drugs, by promoting greater justice, educating young people in the values that build up life in society, accompanying those in difficulty and giving them hope for the future.”

“We all need to look upon one another with the loving eyes of Christ, and to learn to embrace those in need, in order to show our closeness, affection and love,” Pope Francis insisted.

He added, however, that an embrace is not sufficient – “we must hold the hand of the one in need,
of the one who has fallen into the darkness of dependency … and we must say to him or her: 'You can get up, you can stand up. It is difficult, but it is possible if you want to.'”

Pope Francis encouraged the patients, as well as “all those others who have not had the courage to embark” on the journey of recovery that for them to flourish, they must “stand up” and seek assistance.

“You will find an outstretched hand ready to help you, but no one is able to stand up in your place. But you are never alone! The Church and so many people are close to you. Look ahead with confidence.”

He returned to the theme of hope, which had discussed during his homily at the Marian shrine Aparecida earlier in the day.

“To all of you, I repeat: Do not let yourselves be robbed of hope! And not only that, but I say to us all: let us not rob others of hope, let us become bearers of hope!”

Pope Francis commended and thanked the workers and volunteers at the hospital, saying that “I believe that here … the parable of the Good Samaritan is made tangible,” and that “in these persons, the flesh of Christ suffers.”

“Here there is no indifference, but concern. There is no apathy, but love.”

He concluded by assuring those who struggle against addiction, and their families, that the Church is close to them, and “accompanies you with affection.”

“The Lord is near you and he takes you by the hand … trust in the maternal love of his Mother Mary. This morning, in the Shrine of Aparecida, I entrusted each of you to her heart. Where there is a cross to carry, she, our Mother, is always there with us. I leave you in her hands, while with great affection I bless all of you.”

Originally published at Catholic News Agency on 24 July 2013.  Used by permission, all other rights reserved.