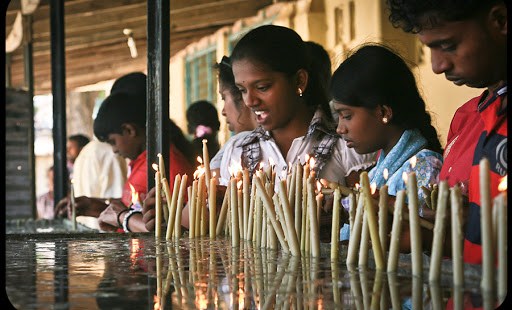 A group of drunk young men destroyed statues, forced open the tabernacle, and attempted to set the tabernacle on fire – but were miraculously unable to light it on fire even after dousing it in kerosene

Cardinal Malcolm Ranjith of Colombo has forgiven the desecrators of a Catholic church in Sri Lanka, refusing to press criminal charges against them.

Father Cyril Gamin Fernando, spokesperson for the Archdiocese of Colombo, told CNA that the act is an exemplar of “Christian love and mercy.” He said the gesture caused a “shockwave” of surprise and won “goodwill” among Sri Lankans.

On the night of June 5 a group of drunken young men attacked and desecrated St. Francis Xavier Catholic Church in the town of Angulana south of Colombo.

He said the group poured Kerosene oil to burn the tabernacle, which miraculously failed to catch fire. Investigators found 30 matches that had been lit soaked inside the Tabernacle.

The Angulana police arrested three persons for the crime.

The small church is about 750 square feet in area. It is one of several chapels and churches in the parish of Rawathatte, which serves about 4,000 families.

Soon after the crime, parish priest Fr. Christo Viraj Fernando and the rest of the community conducted penitential services with intercessory prayers seeking forgiveness for the desecration of the house of God.

The priest said most Buddhists are “tolerant” people and are peaceful and harmonious except for a few “extremists.”

Some Buddhist monks have also condemned the attack and expressed their “solidarity” with Catholics, Fr. De Silva said.

He told CNA that most Sri Lankans are “rational,” “understanding” and favor inter-religious dialogue, though some extremist forces are indoctrinated and incited to violence.

Christians make up about 8.4 percent of the 20.4 million people living in Sri Lanka.