Battling for the Heart and Soul of Notre Dame 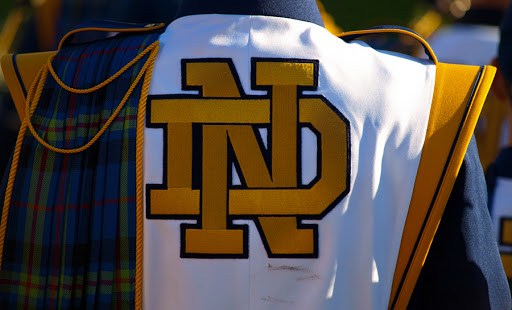 An Interview with Father Bill Miscamble, CSC, author of a new book that examines the current state of the Church’s flagship university, and what’s in store for its future.

Rev. Wilson D. (Bill) Miscamble, C.S.C., joined the permanent faculty in the history department at the University of Notre Dame in 1988. An Australian native, he received his doctoral degree from Notre Dame in 1980, and was ordained a priest with the Congregation of the Holy Cross on April 9, 1988. He chaired the history department between 1993-1998, has served as rector and superior of Moreau Seminary, and has published a number of books. His most recent is For Notre Dame: Battling for the Heart and Soul of a Catholic University, published by St. Augustine’s Press. Fr. Miscamble recently spoke with us about the Catholic identity of the University of Notre Dame.

The University of Notre Dame appears to have two faces. There’s the public face of Our Lady’s university as a flagship for Catholic higher education, and then there’s the hidden face that visitors don’t see. Can you provide some insights into this view?

There’s the academic heart of the university, and there is what might be called “the neighborhood,” which is campus life and the Lady on the Dome and so forth. Folks who come as outsiders see the visual expression of religion and people coming to Mass – which is all terrific – and they say, “What’s your problem? Why are you worried about Catholicism at Notre Dame?” However, when you go into the classroom, is what students receive here that much different from what they would receive at any other place?

Where I see a kind of two faces is Notre Dame is a school that wants to be the preeminent Catholic university to a variety of constituencies, yet we face all the temptations to conform to all the universities with which we want to compete, and that is done often at a cost to our Catholicity. I say that we worship at the golden calf of U.S. News and World Report’s rankings, with all that implies. I hope that Cardinal Newman Society readers will understand that there is a real struggle going on for the future of Notre Dame, a struggle for what kind of place this will be.  Notre Dame needs to be held accountable.

Tell us about your new book.

It represents, in a certain sense, two decades of my efforts here at Notre Dame to develop an authentic Catholic university. I joined the full-time faculty in 1988. The pieces in the book represent both written and spoken contributions on that debate over two decades. It’s broken up into two sections; one on the 1990s, and one on the most recent decade up to 2012, in which there were many more specific controversies. My hope for the book is not just that it’s a record of past engagements, but I hope that it will be an encouragement for other folks to take stock of where we are, and to encourage reflection about where we might go forward.

In the foreword of your book you write: “Notre Dame is blessed with real strengths as a Catholic university. Yet without major actions to bolster its essential institutional commitment the university’s strengths are insufficient to ward off the dangers that threaten its Catholic mission.” What do you see as Notre Dame’s greatest strengths?

We have a wonderful tradition. We have a century-and-a-half-plus commitment to Catholic education and contribution to American Catholic life. There’s an expectation for us to be Catholic. We have something to live up to.

That type of tangible sense is deeply important. We have the contribution of the religious community involved here, the Congregation of Holy Cross. While I would say that the Order could have contributed more in the past two decades, we are still deeply engaged in this institution and see it as a crucial apostolate. We have a terrific core of Catholic scholars across a range of departments, and we have attracted recently some committed Catholic scholars who believe in the mission. We have a mission statement that sets out clearly that we are to be a Catholic university. We have financial resources. We have a beautiful campus, and a vibrant liturgical life on campus. While I worry that more and more of our students come because of our ranking, many do come seeking a distinctly Catholic education. We have important and crucial strengths that should allow us to develop as truly a strong Catholic institution that has an international reputation for playing a crucial role in the future of the Church and society generally.