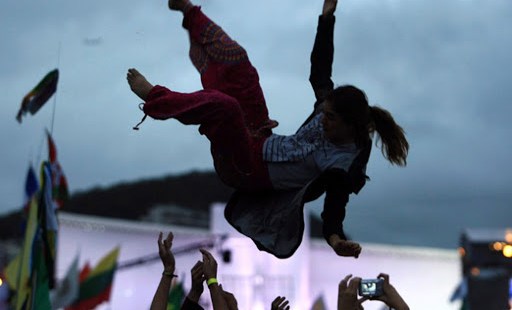 The streets are buzzing, the ground is shaking and the rulebook has been well and truly thrown out the window…this is WYD in Rio de Janeiro.

Hundreds and thousands of youth have made their way from across the globe to get a taste of the most revolutionary WYD yet.

What do you get if you take our spontaneous new Pope plus the Brazilian flare for life and a mountain with a gigantic statue of Jesus on top of it? …you get WYD 2.0  – a.k.a – Holy Pandamonium!

The epic event has been set off with a BANG: samba, music, parades, fireworks, drums, singing, praising, praying…this proud and passionate nation is taking us on one wild ride, and driving the runaway roller-coaster is our very own Holy Father, who keeps us on our toes with every move.

He is the man. Leader of the Church and Successor of Peter: a plainspoken, fearless and radical Robin Hood (without the stealing) – defender of the downtrodden and friend to the poor – and he is most definitely rocking the WYD show.

Day 1: as the youth and bishops get down to their catechism in an array of languages throughout the city, Pope Francis pays a visit to the national shrine of Aparecida, dedicated to Our Lady of the Conception. “Keep the hope” was the Holy Father’s message in his homily. “Always know in your heart that God is by your side” he says, “He never abandons you!"

His next stop was at Saint Francis’ hospital, a refuge for drug addicts and the homeless, run by the Franciscans. There he spoke to health workers and addicts alike: “We extend our hand to whosoever is in difficulty or to who has fallen into the darkness of addiction, perhaps without knowing how, and we say to them: You can raise yourself up again, it is tiring, but it is possible if you want it.”

Meanwhile the young people took to the streets for one colossal youth festival. With parades, music and dancing galore, an array of colour and noise swept through the city of Rio, setting it ablaze with the joy of Christ.

Day 2: the Pope took himself off to one of the most notorious favelas of Varginha – where even the Police think twice before going -so he could spend some time with his beloved poor.

This shantytown, dubbed the “Gaza strip”, is famous for its violence, drug crime and gang warfare, yet Francis declined the bulletproof vest and walked among the community there, who welcomed him with open arms.

He spoke to them from a makeshift stage overlooking a football field and said: “I hold each one of you in my heart and I make your most intimate intentions my own: ones of gratitude for certain joys, pleas of help in times of difficulty, desires for consolation in moments of pain and suffering. I entrust all of these to the intercession of Our Lady of Aparecida, Mother of all the poor in Brazil.”

Next, he made his way down through the favela, greeting the people, blessing babies, hugging kids and getting kissed by every old lady in the district.

One of the people

Then in true Francis style he stepped into the house of a family there and spent a little time with them, before setting off back to the city, but perhaps leaving a little of his heart behind.

Just as we thought we’d seen it all, on his way back to Rio de Janeiro, Pope Francis decided to have an ‘improv’ meeting with his compatriot youth in the metropolitan Cathedral. Some 30,000 young Argentinians flocked to its doors, hardly believing their luck.

There the Pope turned to them with arms outstretched: “I expect the youth to make some noise!” he called amidst emphatic cheering, “and the Church to take to the streets!”

He called on them to forget “mundanity, clericalism and closure”, and that they should shake things up; “faith can’t be watered down” he affirmed. The Pope thus appealed to his compatriot youth to turn to the Beatitudes in the Gospel and concluded his address by asking them: “pray for me, I need it”.

The weather has been as unpredictable as the Pope this WYD, as it hurls it down during the first couple of days. Does this stop them? No way! The world’s Catholic youth show how hardy they can be as they stick the cold and the wet out for hours on end, waiting for the first glimpse of the Pope as he touches down on Rio soil, and setting up sodden deck chairs on the Copacabana beach to get a good spot for the opening mass; everyone on form, everyone in spirits.

Who needs sun when you have the light of Christ, right?

And so the long awaited evening arrived, on the sandy, albeit watery Copacabana beach, where the Pope addressed all of the WYD pilgrims for the first time. Nearly one million people gathered around him and he called out to all: “Christ the Redeemer, from the tip of Mount Corcovado, welcomes us all to the beautiful city of Rio!”

Pope Francis then asked for a round of applause for Pope Emeritus Benedict XVI, who was the one to actually invite the youth to this year’s WYD: “I asked Benedict to accompany us with his prayers and he is watching us right now” said the Holy Father. To this the crowd erupted into a tumultuous ovation.

(**a moment to take our hats off to our beloved Benedict.**)

He continued: “at the heart of the Year of Faith these questions invite us to renew our Christian responsibility. Our families and local communities have passed on to you the great gift of faith; Christ has grown in you”.

“With Him all of our life is transformed” he exclaimed. “For this reason today I say to you absolutely: ‘put Christ’ into your life and you will find a friend in which you can always trust… you will see the wings of hope grow, you will be able to travel with joy along the path of the future… and your life will be filled with His love.”

After his address the Brazilian youth put on an epic show, carrying the party on into the early hours of the morning, leavving the shores of Copacabana singing "oh what a night!"