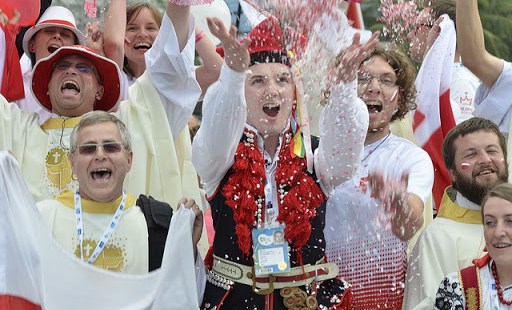 Young Polish men and women gathered in Rio rejoiced at Pope Francis’ announcement that Krakow, Poland will host the next World Youth Day in the summer of 2016.

“We had heard it could be in Poland but we weren’t sure,” she told CNA.

She was with a group gathered among the three million youths at Copacabana beach July 28 for Mass with Pope Francis. The final Mass was the capstone of the world’s biggest Catholic youth gathering, which witnessed five days of celebrations.

After the Pope announced World Youth Day would be held in Krakow, thousands of Poles who were scattered across Copacabana Beach cheered loudly. They waved their flags, screamed and posed for other youths who enthusiastically took their pictures.

Krakow pilgrim Anna Lesniara was among them.

“Yesterday and today were the best two days for me because we were all here today and because of this amazing announcement,” she remarked.

She said she wants to be a volunteer in 2016 after experiencing her first World Youth Day in Rio de Janeiro.

“Here so many people helped me and I want to help them in Krakow,” stated Lesniara. “I’m so excited and I’ve met so many different cultures and wonderful people.”

“Poland will embrace the entire world,” he said. “Being here will all these good people of Brazil, we want to receive all young people.”

Olczykowski said that what he likes best about Pope Francis is that he is “very close to people, just like Blessed John Paul II.”

“I’m so happy and excited that it will be Krakow because I’m studying medicine there,” said Magdalena Witowska.

“This is really going to strengthen our faith and unite the youth in Poland,” she remarked.

The 23-year-old said that what she best likes of Pope Francis is that on his way to the stage, he blessed the children.

“I’m very, very happy, I like everything of Pope Francis!” exclaimed Bartosz Kot, another pilgrim. “This is going to really help Poland.”

Bana?  said she loved that the Pope said “we shouldn’t be afraid of going to the world and proclaiming Jesus.”

His presence was felt in Rio, where a case containing a relic of the late pontiff was on display.

It will remain in Brazil until Oct. 13 for veneration by young people in the Saint Sebastian Cathedral of Rio de Janeiro.

At the end of the Mass, Polish Cardinal Stanislaw Rylko, president of the Pontifical Council for the Laity, addressed the millions of youth gathered at the beach.

Pope Francis then gave five pairs of young people a prayer book and a small copy of the Corcovado statue of Christ the Redeemer, the symbol of “The Marvelous City.”

After the Angelus, Pope Francis went to his Sumaré residence for lunch and a brief break.

On Sunday afternoon he will address the Latin American Episcopal Conference. Later, he will speak at a meeting with 15,000 volunteers of the 60,000 total that helped out in World Youth Day.

Pope Francis will then depart at 7 p.m. local time and arrive to Rome tomorrow, Monday at 11:30 a.m. Rome time.

Originally published at Catholic News Agency on 28 July 2013.  Used by permission, all other rights reserved.