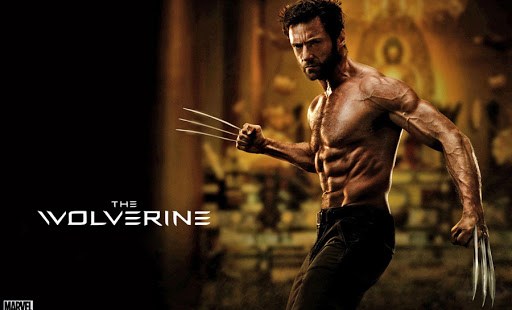 If you’re looking for a great action movie, you’ll be disappointed. But much like Christopher Nolan’s Batman movies, The Wolverine is deep, and has a fascinating exploration of the meaning of life and eternity.

Anyone slightly familiar with Wolverine – Marvel’s best-known character – is that he is the best of any at what he does. And what Wolverine does best – be it in the comics or in the movies – is to have a convoluted, contradictory personal history that can give a person a migraine if they think about it too hard. (Yeah, he's also pretty good at slicing and dicing people with those retractable claws of his, but it’s the timeline thing that’s really overwhelming.)

Having now made appearances in four X-Men films and a standalone origin story of his own, the best chronology anyone can determine for movie-Wolverine (A.K.A. Logan, A.K.A. James Howlett) is that he was born in 1832, developed claws and his mutant healing ability at age 13, fought in every major American conflict since the Civil War (odd, considering he’s Canadian), had indestructible adamantium grafted to his skeleton in the mid-80s, lost his memory soon after, and finally joined the X-Men in 2004, where he eventually got around to reluctantly gutting the woman he loved.

Got all that? Good, because the latest film set in the X-Men movie universe, The Wolverine, piles on even more backstory to the title character’s already overcrowded 181 years (and counting) of living. The film begins on August 9, 1945 – the date the United States armed forces dropped the atomic bomb on Nagasaki. It’s in a POW camp on the outskirts of the ill-fated city that Logan is being held captive inside a deep pit. When a young Japanese soldier by the name of Yashida takes it upon himself to release all of the Allied prisoners so they can try and make a run for it before the blast hits, Logan returns the kindness by shielding the young man from the bomb’s shockwave with his own body.

Jumping ahead to present time, we see that Logan has once again banished himself to the snow-clad wilds of Canada. Though he saved the entire world by slaying his beloved Jean Gray at the end of X-Men: The Last Stand, Logan has been unable to forgive himself for the act and has vowed to remain in isolation so that he’ll never again harm another human being. Even separated from his fellow humans, however, Logan can’t escape the nightly dreams in which he is visited by the spirit of Jean, who urges him to join her in death – an act he would willingly concede to if, in fact, he could actually die. Logan’s self-imposed exile is cut short, however, when he finds himself drawn into conflict with a local hunter whose use of illegal poisoned weapons offends Logan’s sense of fair play (your grade school literature teacher called this kind of plot point “foreshadowing”). It's in the middle of Logan’s confrontation with this man that a young Japanese woman named Yukio arrives to summon Wolverine back to Japan, where a now sick and aged Yashida wishes to say his final farewells.

It’s only after reluctantly making the trip that Logan discovers there is much more to Yashida’s summons than the mere desire to say goodbye to an old friend. With the aid of a somewhat sinister seeming scientist, the dying Yashida has developed a way to transfer Logan’s healing ability into himself, an act which would not only allow Yashida to regain his youth and save his family’s crumbling financial empire, but also finally free Logan from his self-proclaimed prison of immortality. Logan hesitates in undergoing the process, however, as he is unwilling to pass his burden on to another person. And it’s here that the movie starts to touch on some existential considerations that aren’t the typical fodder one often finds in modern super-hero movies, such as, “What does eternal life actually mean?” and “Just how long do we want to cling to existence in our earthly bodies before moving on into eternity?”

But action fans need not worry too much that such ponderous ponderings turn The Wolverine into Marvel’s version of My Dinner With Andre. These musings are only very lightly touched on before it’s time for Logan to pop his claws once again. As is quickly revealed, the suspicious scientist is none other than the villainous Viper, a mutant with the ability to secrete lethal toxins from her body (see, what did I tell you? Foreshadowing!). On the night Yashida draws his last breath, Viper slips into the room where Logan is sleeping and slides something down his throat to suppress his healing powers. Logan himself only learns this after members of the Yakuza attack Yashida’s funeral in an attempt to kidnap Yashida’s granddaughter, Mariko, and subsequently riddle Logan’s body with wounds from which he does not heal. Realizing there was much more behind Yashida’s request than just the desire to extend the dying man’s life, Logan takes Mariko into hiding and vows to protect her from the many forces aligned against her, despite the fact that he is now injured and very much mortal.

A viewer’s enjoyment of what follows will likely depend on their expectations as they enter the theater. James Mangold is not high on the list of directors one would first think of when it came time to choose someone to helm a super-hero movie. With a résumé that includes such films as Girl Interrupted, Walk The Line (yes, the Johnny Cash biopic), and the recent remake of 3:10 to Yuma, Mangold isn’t the most action-oriented guy in Hollywood, and that fact becomes evident as the movie goes along. A sequence in which Wolverine fights a number of Yakuza thugs atop a speeding bullet train is sufficiently thrilling, but a scene in which Logan is confronted by a hundred or so ninjas ends in a whimper, and the final fight with the enormous Silver Samurai feels like nobody’s heart was really in it. So for those expecting a slugfest in which Logan slices his way through half the population of Japan, The Wolverine might be a bit of a letdown.

Conversely, for those who like a slightly (and I do mean slightly) more philosophical bent to their super-heroics, The Wolverine has a bit more to offer. Many recent comic book adaptations – the Christopher Nolan-produced Batman and Superman movies in particular, but films like The Lone Ranger as well – have come under criticism in some circles for their seeming acquiescence to our modern culture’s embrace of nihilism. To what degree those criticisms are deserved by the films in question is an argument for another time, but suffice to say, the criticisms are out there. Whether intentional or not, The Wolverine appears to address these concerns rather directly.

In the movie, Viper openly declares herself a nihilist (hey, why make us guess when the villain can just bluntly blurt it out?) – a person who believes our existence on this planet has no objective meaning, purpose, or intrinsic moral value. And in the beginning, Logan appears to be somewhat on her side, philosophically at least. After the death of Jean, he no longer feels life has any meaning, and therefore his perpetually extended existence is nothing but a living hell from which he cannot escape. But through his interactions with Mariko, the hero he once was resurfaces, and he comes to accept that even someone with his dubious skill set may actually have a purpose in this world. And just to make sure the viewer doesn’t miss the subtext, the movie helpfully includes a scene straight out of Ezekiel 36 in which Logan quite literally (and graphically) receives a new heart.

So while a little lacking in the action department, The Wolverine surprisingly turns out to be one of the more thoughtful super-hero movies to make the scene in a while. Not exactly what one would expect from a movie where the “hero” is basically a killing machine, but that dichotomy is what always made the character of Wolverine interesting to begin with.